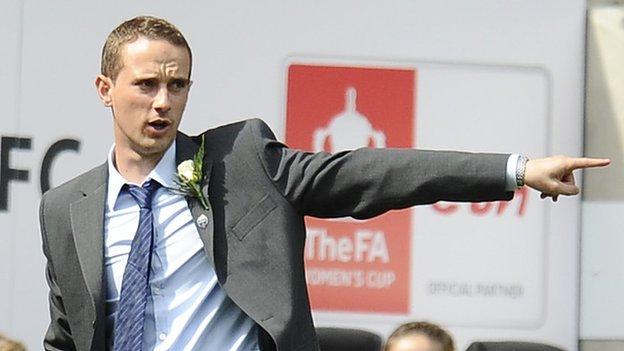 Bristol Academy boss Mark Sampson has been appointed as the new head coach of the England women's team.

Sampson, 31, who led Bristol to second in this season's Super League, their highest-ever finish, has signed a four-year contract.

He succeeds Hope Powell, who was sacked in August after 15 years in charge.

"I am ready to give everything I have to build an England team that every English supporter can be proud of," Sampson said.

"This is a huge challenge for me personally and one in which I'm looking forward to taking on," he added.

Caretaker boss Brent Hills had been leading the side since Powell's dismissal. England currently sit top of their qualifying campaign for the 2015 World Cup with four wins out of four and no goals conceded.

Sampson's first task will be to name a squad for the January training camp in La Manga.

Sir Trevor Brooking, the Football Association's director of football development, said: "Mark is an outstanding manager with a tremendous passion and commitment to drive the game forward in this country.

"We were extremely impressed by Mark's vision for the England women's team and we are all looking forward to working with him in what is a very exciting time for the women's game in this country."

Sampson, who also guided Bristol to two FA Cup finals and Champions League qualification in his five-year tenure, added: "I'm very proud and honoured to be offered the opportunity by The Football Association to manage the England women's senior team.

"Women's football in England is in a fantastic place right now with the growth and development of the game in the last few years.

"I am also very thankful to Brent for the excellent work he has done in helping the team get off to a winning start in the qualifying campaign for the World Cup in 2015. The aim is to build on this momentum going forwards, and I look forward to the first training camp in January."

Prior to joining Bristol, Sampson was centre of excellence manager at Swansea City under Roberto Martinez.

The FA also wants to appoint a new head of elite women's development.