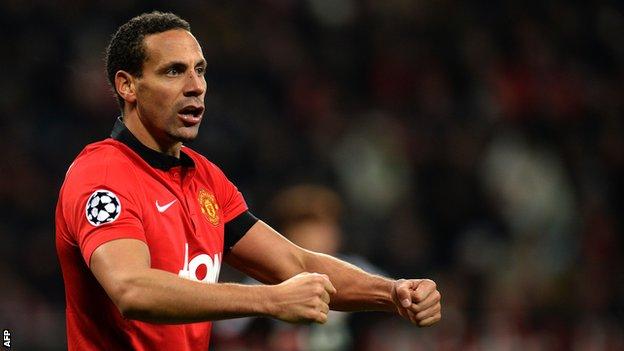 Rio Ferdinand will be part of the BBC punditry team for the 2014 Fifa World Cup in Brazil, BBC Sport has announced.

The Manchester United defender and former England captain, 35, has 81 international caps and was selected in four World Cup squads.

He joins other former England players Gary Lineker, Alan Shearer and Phil Neville to provide analysis of the tournament in June and July.

"I really want to provide a different sort of insight and analysis," he said.

Ferdinand is close friends with many of the England team and is on which was set up to improve the national team's fortunes.

In addition to his punditry role, he will present a documentary and film features during the tournament and will have a special role with interactive and social media content.

"I want to interact with audiences throughout the summer, with special forums and using social media to answer viewer questions and provide extra content," he said.

"I'll be cheering on England, especially with quite a few of my club-mates involved. But there'll be a great array of Premier League players on display throughout the tournament and I'm excited to see how they all perform on the big stage."

"Rio has a reputation for telling it how it is and I'm sure audiences will look forward to hearing his opinions and insight in the studio," he said.

"He is a fine footballer with a proven track record and has played with and against some of the top internationals who will be at the World Cup. We're already incredibly proud of our BBC team and we're delighted to add Rio to our line-up."

BBC head of TV sport Philip Bernie said: "We are delighted to have Rio with us for the World Cup and believe he will be a real star of our coverage this summer," he said.

"The BBC has a proud reputation of delivering the biggest names and highest quality coverage at major football tournaments and we are sure Rio will play a central part in helping us deliver this again."