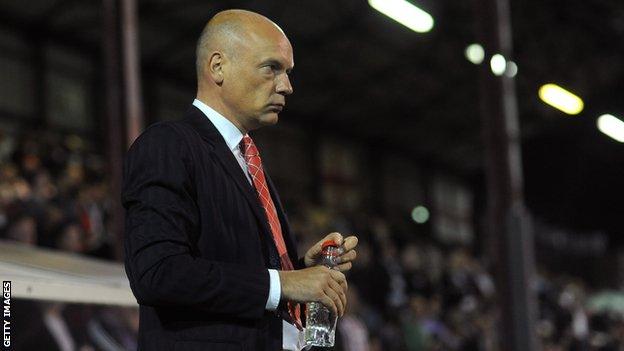 Wigan have been granted permission to speak to Brentford's Uwe Rosler about becoming their new manager.

Rosler has been in charge at Griffin Park since 2011, but looks set to succeed Owen Coyle at the DW Stadium.

He will take charge of Saturday's FA Cup tie at Carlisle, after which he will begin talks with the Latics.

Wigan chairman Dave Whelan had hoped to conclude a deal on Friday. First-team coach Graham Barrow will take charge of their Championship trip to Millwall.

The FA Cup holders, who are 14th in the table, following a 3-1 home defeat to Derby County and Whelan believes Rosler - whose home is in the North West of England - is ideally suited to the role.

"I've had a good look around and I've had very good reports on him," he told BBC Sport. "He's obviously a former Manchester City player and lives in the area. He's the type I'm looking for and I'm determined to get an agreement.

"I'm told he's mad keen to come and I have to say, Brentford have been very good in their dealings. They are obviously reluctant to lose him but they've been very, very helpful.

"The aim would be for him to get us in the play-offs this year and get back up to the Premier League inside two seasons."

Brentford, who reached the League One play-off final in May and are fourth in the third tier this term, confirmed that they had "reluctantly" given the German, 45, permission to speak to Wigan.

Chief executive Mark Devlin told BBC London 94.9: "None of us would like to see Uwe go but it is one of those things.

"Hopefully we will get some news from him that he doesn't want to go, but I'm not so sure that will be what we hear."