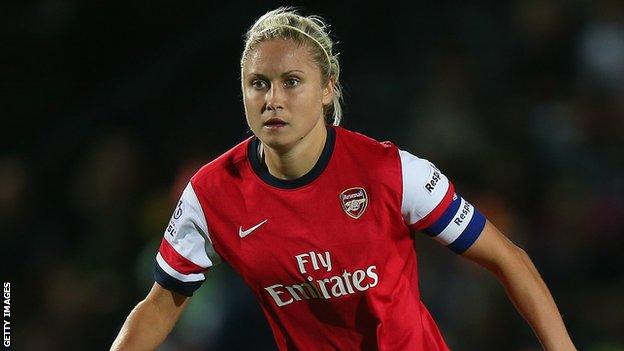 Arsenal and England defender Steph Houghton has agreed a move to Manchester City Ladies and will sign a three-year contract in January.

The 25-year-old has played 40 times for her country and also represented Team GB at the 2012 Olympics in London.

Houghton captained Arsenal to an FA Cup and Continental Cup double in 2013, but the Gunners could only finish third in the Women's Super League.

Fellow England internationals and have also signed for the Blues ahead of next season.

"I'm so glad that City came in for me because as soon as I heard their plans for the future, I knew I wanted to be part of it," the former Sunderland and Leeds player told her new club's website.

"I'd like to thank Arsenal very much for everything they've done for me. They've helped me to grow as a player and it was a massive decision for me to leave. I had three very successful years there and I didn't take the decision lightly."

An England debutant in 2007, injuries prevented Houghton from appearing in that year's World Cup and Euro 2009, although she did feature at the 2011 World Cup and a disappointing Euro 2013 campaign.

She came to prominence with a series of impressive displays for Great Britain during London 2012 and at Wembley.