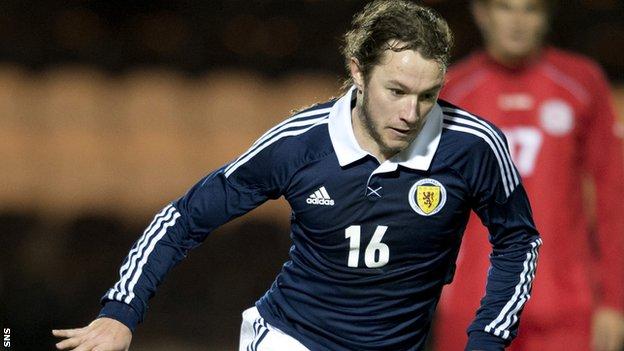 Aberdeen boss Derek McInnes believes St Johnstone's strength is team work but acknowledges Stevie May is a player the Dons need be wary of on Saturday.

McInnes was in charge of the Saints when May scored on his debut aged just 16.

The 21-year-old has knocked in 12 goals this season and McInnes is not surprised to see the striker flourish.

"His confidence at the minute is something we must be aware of," said McInnes. "He's a talented boy."

McInnes left St Johnstone in October 2011 for Bristol City but there will be several players he knows well lining up for the home side at McDiarmid Park.

"I think St Johnstone's biggest strength is in their actual team-work," he added.

May's good form has seen him capped for Scotland at Under-21 level this season and attracted offers from Peterborough and Rotherham.

"Young Stevie, I gave him his debut back five years ago now. Even in his debut, he lit the game up at times.

"He has had a really prominent season, a lot getting made of him, but he's certainly answering up at the minute.

"And, although they're certainly not a one-man team, he's certainly a player they lean heavily on because of his goals.

"I think what he's got is a real confidence.

"Stevie as a boy, I remember even in an youth cup game when I took the team when I was still playing, it went to a penalty shoot-out down at Airdrie and he was only 15 at the time and first up to take the first penalty.

"When you come up against boys like that, and there are a few teams in the league this year who've got players like that, who expect to score when they go out on the pitch, I think you've always got to be aware of that.

"And I think that, while he's got that confidence, he can be a player who can go on to have a good career."