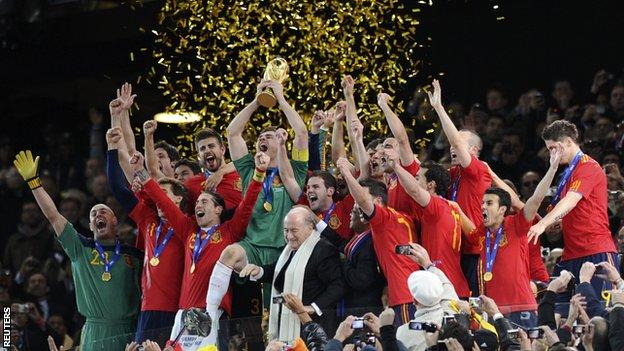 Cast your vote on the 2014 Fifa World Cup through BBC Sport's online votes.

The first vote on who will win the tournament saw Brazil come out on top, closely followed by Germany, Argentina and Spain.

Next up at 16:00 GMT on Friday, readers will be able to vote during BBC Two's Match of the Day programme on how far they think England will progress.

Signing in or registering a new BBC iD is simple. You will need a username or email address and a password.

As well as being able to vote, you will also be able to comment on stories, add favourites and more. We store your information securely, and we never share it without your permission. We will only use your personal data for the purposes of running the vote and in accordance with our Privacy and Cookies Policy.

All the votes will be hosted through bbc.co.uk/worldcup. They will be available to users in the UK only.

The first vote saw Brazil account for 32.3% of the vote, with Germany second on 26% and Argentina on 13.1%. World Cup holders and European champions Spain were fourth with 7.8% before Belgium on 5.4%.

England ranked sixth in our vote with 5.2% ahead of nations such as Holland, Italy and France.

The next vote will start at 16:00 GMT until 17:25 GMT, ahead of the final vote during BBC Radio 5 live from 20:00 GMT. Results will be announced on air and on the BBC Sport website.

To cast your vote you will need to be signed in to the BBC website. Signing in or registering a new BBC iD is simple.

To do so, register or sign in using a username or email address and a password. One vote can be cast per BBC iD.

Registering for a BBC iD now will mean you are ready to cast your vote in Sports Personality on 15 December which will have online voting for the first time.

Full details of the terms and conditions for the World Cup votes.