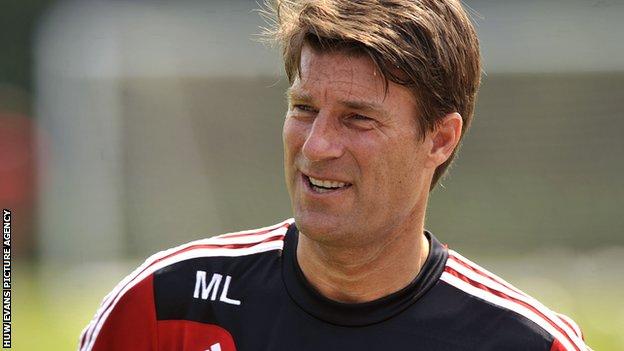 Swansea City manager Michael Laudrup will not bid to sign a striker in the January transfer window, despite all three of his forwards being injured.

Spaniard Michu is closest to full fitness, but remains a doubt for Monday's clash with Hull.

"In maybe a couple of weeks all three will be back," said Laudrup.

Vasquez signed on a season-long loan from from Spanish side Getafe in September with a view to becoming a permanent signing in future.

As back-up for Michu and Bony, Vasquez had to play three games in six days and Laudrup believes that burden may have contributed to the player's injury in the Premier League against Newcastle.

Alejandro Pozuelo, Nathan Dyer - who scored one of their goals - and Roland Lamah, all took on the front role at some stage against the visitors at the Liberty Stadium.

Afterwards Laudrup said three strikers should be sufficient for the campaign.

"We have three and it is a case right now that all three are injured," said Laudrup.

"That's a coincidence, but if that happens when you have injuries in the same position, well you can't buy six forwards just thinking maybe there will be a couple of games during the season when four of them are injured.

"You can't do that. You have to prepare the squad and when we have three, normally that should be enough."

Michu arrived in Swansea ahead of the 2012-13 campaign as an unheralded £2.2m midfielder.