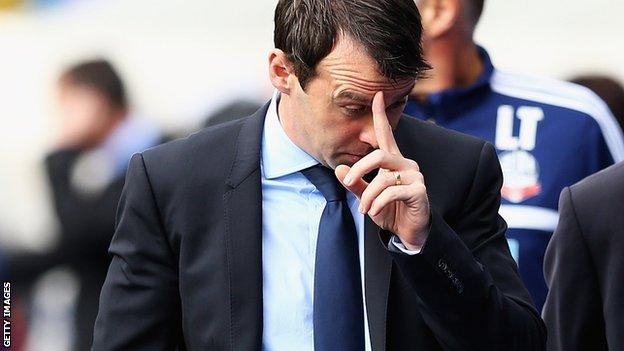 Bolton's Dougie Freedman believes club chairmen in the Championship should be more understanding about the pressure managers are under to deliver results.

Freedman was appointed in October 2012, but is already the seventh longest-serving boss in the division.

"The demands to get into the Premier League makes chairmen make decisions which, in hindsight, might not have been the right one," said Freedman.

"It happens every season. I don't think statistics will tell you otherwise."

Coyle left Wigan on Monday, after less than six months in the job, one of three Championship managers to lose their jobs this week.

Bolton lie 19th in the table, just four points above the relegation zone, but 39-year-old Freedman feels managers should be given more time to put their stamp on a club.

"Owen had a short period of time to try and get some results and I feel for him because he has been in Europe too which takes its toll," he told BBC Radio Manchester.

"We all understand what the role is and maybe that is why we don't get too emotional in terms of up and down results.

"We try and work towards the longer term future, making sure the club is in good health and that is my aim."

Meanwhile, Freedman said he was "very pleased" with the return of midfielder Mark Davies, who played 65 minutes of a practice match against Rochdale on Wednesday.

The former Wolves man played for the first time since at the end of February.

The Scot added: "I made a difficult decision to leave Mark out for another month so he is very fit. He will return to the first team in a couple of weeks."