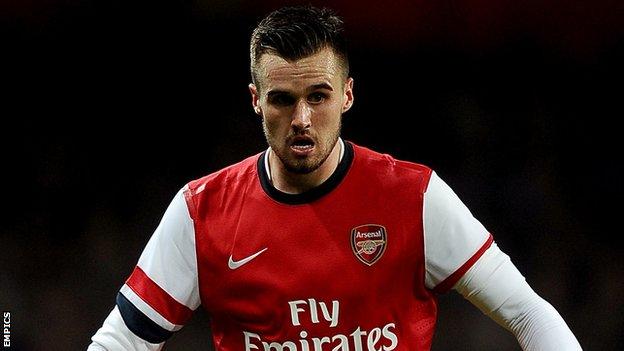 Arsenal defender Carl Jenkinson is hoping for a bigger role in their Premier League title challenge.

The 21-year-old made his first Premier League start since October in the 2-0 win over Hull on Wednesday.

He told BBC London 94.9: "The way the back four has been playing lately, I've had to just sit back and admire it really. They have been fantastic.

"It is nice for me to get a game. I want to be involved in this journey we are on at the moment."

It is still very early on. Football can change very quickly and it is important we keep the right mentality and stay positive

The north London club are currently top of the Premier League table, with a four-point lead over Chelsea, but Jenkinson warned they must not become over-confident as they seek their first title since 2004.

"It is still very early on," he said. "It is important we use the momentum we have got and keep going. Everyone is enjoying their football and how we are playing.

"We are top of the league, not conceding many and scoring a lot of goals. That speaks for itself. Everyone is buzzing really.

"Football can change very quickly and it is important we keep the right mentality and stay positive."

Meanwhile Jenkinson said everyone at the club was hoping Pat Rice will make a speedy recovery after being diagnosed with cancer.

"He is a legend at the club and it was awful news to hear of the situation he is in," Jenkinson added.

"It was quite a touching moment when the fans were singing his name [during the match against Hull].

"I only had two seasons with him, but he was fantastic for me. He is loved around the club and is such a great guy. We can only wish him the very, very best."