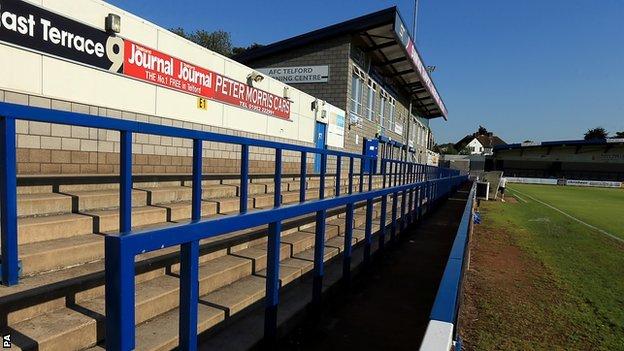 AFC Telford boss Liam Watson says his players have to ask themselves some tough questions if they are to rediscover their best form.

Watson guided the Bucks to four wins in a row before they were knocked out of the FA Trophy by Worcester City in Tuesday's first-round replay.

We have a massive six games and we have to be right and go on another run,

"They need to look in the mirror and say 'have I given everything?'

"When they step over that white line they have to make sure they put a shift in," Watson told BBC Radio Shropshire.

Despite his disappointment at the end of their good run, the former Southport boss knows he has to strike the right balance between challenging his squad and keeping their morale up.

"The standard we performed at was not acceptable but, on the flip side, I've also got to get them back on side and focus on Saturday," he said.

"They're an honest bunch of lads and we've got to get ourselves back to where we were.

That victory was Telford's third in a row in Conference North and a run of 16 points from their last seven games has put them just two points behind leaders Solihull Moors.

"Every game becomes huge. We've got Leamington on Saturday and then go to Workington, which is never easy," Watson added.

"Then we go Brackley, Hednesford, Boston and Hednesford again, so we have a massive six games and we have to be right and go on another run."