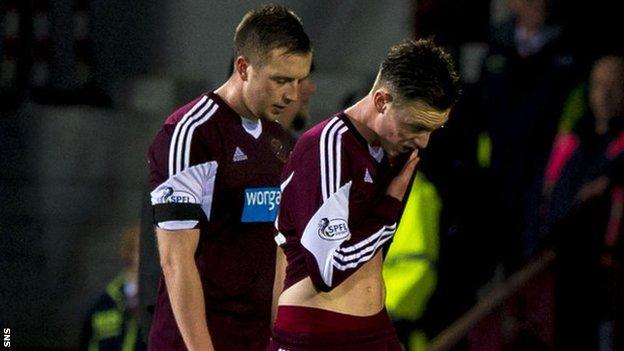 Manager Gary Locke says it was only a matter of time before Hearts suffered a hammering considering he is fielding "an under-20 team".

The Edinburgh club were banned from signing players after going into administration in the summer.

And Locke's young side were on Sunday.

"We're hurting, but let's not forget where we are at the minute - we've got an under-20s team," he said.

"At the start of the season, everyone outside this club expected us to be on the end of a few heavy defeats.

Without the 15-point deduction, we'd be sitting third bottom of the league

"I said that was always going to happen at some point.

"So it has happened and it is now important that we respond in the right manner.

"Tottenham went to Manchester City a few weeks ago and lost by six, so it happens. That's football."

Hearts sit bottom of the Scottish Premiership, 12 points behind Kilmarnock, having been deducted 15 points for going into administration.

However, Locke said it had to be taken into account that his side only contains three players older than the squad average of 22.

"People can say we are using it as an excuse, but that is a fact," he said.

"I could put out our team that played on Sunday in the under-20 league.

"So that's where we are and it's not an excuse, but we have to do better.

"We can't lose the goals we did on Sunday. For three or four of them, we were all over the shop."

Hearts, who will not come out of administration until after the closure of the January transfer window, can finally reach zero points if they defeat Dundee United at Tannadice.

"We haven't done too badly this season," added Locke. "Without the 15-point deduction, we'd be sitting third bottom of the league.

"I believe in these players, but we have to do better when we face Dundee United on Saturday."