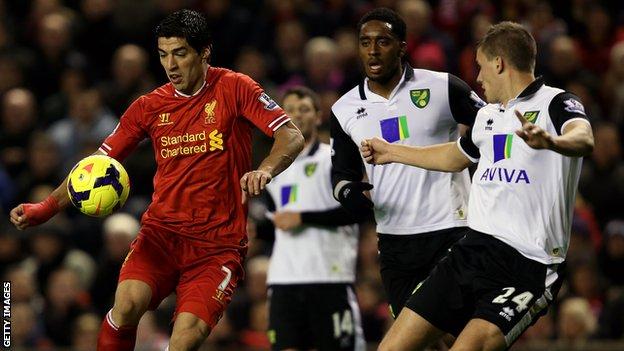 The striker has now scored 11 times in five games against the Canaries.

"The goals were unacceptable. You can't concede those goals and expect to win a game," Hughton told BBC Radio Norfolk.

"Suarez is a great player. A world class player. If you give him that freedom to find opportunities then he is going to take them."

Suarez's quartet of goals at Anfield on Wednesday night included a 40-yard looping effort and a superb half-volley.

Raheem Sterling added Liverpool's fifth after Bradley Johnson had headed in a Canaries consolation, but Hughton expressed his anger at his side's defensive shortcomings.

"There were four goals that could have been avoided and four goals that defensively we should have done better at," said the Norwich manager, who watched his side lose 7-0 at Manchester City last month and 4-1 at Arsenal in October.

"You can set up as defensive as you like but you're relying on individuals to perform well and defend well. We were nowhere near good enough.

"You'll come away to some of the bigger and better teams and have bad days.

Hughton opted to leave top scorer Gary Hooper on the bench, instead choosing to play Johan Elmander as a lone striker.

"We've got two games in a week. Gary's an important player for us. I thought with the system we played we perhaps needed to stretch them a bit more," he said.