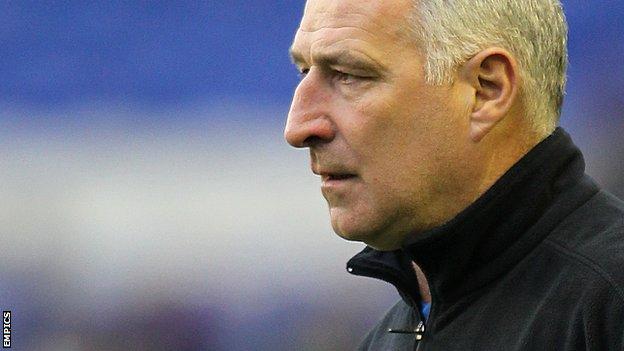 Caretaker manager Graham Barrow says he is unsure when Owen Coyle's replacement will be appointed by Wigan Athletic.

on Monday and the Latics have confirmed his assistant Sandy Stewart has now also left the Championship club.

Barrow was in charge for

"I had a chat with the chairman [Dave Whelan] on Wednesday morning, but it was all about the game," the 59-year-old told BBC Radio Manchester.

"Hopefully we'll be speaking over the next few days, but there's no time for too much talking with the Millwall game coming up [on Saturday]. That [appointing a new manager] will take care of itself."

Stewart, who had worked alongside Coyle during his previous spells at Burnley and Bolton, was due to assist Barrow at Elland Road.

Barrow continued: "For him personally, it's been a tough few days because of how much time he's been with Owen.

"I think he was comfortable and then it probably all got on top of him. We had a chat on Wednesday morning and I completely understand. I became very good friends with him."

Barrow, who had a spell as Wigan manager during the mid-1990's and was in charge when Whelan took ownership of the Latics in 1995, is now hoping to arrest a run of four consecutive losses in all competitions.

The defeat at Leeds left Wigan 14th in the Championship table, nine points from a play-off spot.

"We've just got to get out and start winning football matches," he added. "The league is still wide open. We've just got to make sure we keep in touch over the next month and then see what the new year brings."