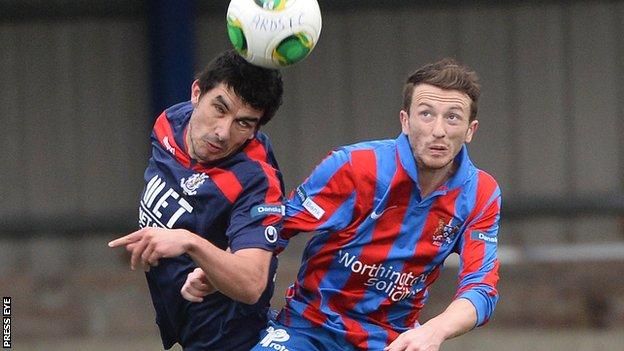 Portadown have suffered a blow ahead of the Premiership game with Ballymena United after defender Emmett Friars sustained a serious knee injury.

Friars, who has a torn lateral ligament and cartilage damage, faces a lengthy spell on the sidelines.

Crusaders are the new league leaders and Stephen Baxter's team travel to take on Dungannon Swifts.

"Dungannon have taken a few big scalps and are playing well but we're really looking forward to it," said Baxter.

The Crues top the table ahead of Linfield on goal difference after a sensational run of 16 league games without defeat.

The Swifts have won their last three matches, including an impressive 3-1 success against Glenavon last Friday night.

League leaders Crusaders take on Dungannon Swifts in our feature match on Sportsound, presented by Michael McNamee, on Radio Ulster at 14:00 GMT on Saturday.

Commentator Joel Taggart will be joined by expert analyst Chris Morgan, who played for both clubs.

Grant Cameron and Liam Beckett are at the Showgrounds for Coleraine's clash with Linfield while there will be reports from the other four Premiership games.

"We've always struggled a bit against Dungannon and in Darren Murphy they have a manager who knows the game really well, and he'll have his team well prepared," added Baxter.

Murphy is wary of the threat posed by the Crues but he is promising a positive approach at Stangmore Park.

"I always judge a team by what they have on the bench - when Stephen wants to make a change he has loads and loads of quality," said Murphy.

"But it's at our place, we have a decent home record and we seem to be scoring goals at the minute, which is pleasing.

"With the Crues also scoring plenty of goals, it has all the ingredients to be a great game.

"We go into the match on the back of three wins, which means we can be really positive and that's what we intend to be.

Linfield will be without banned midfielder Michael Gault, who was sent-off in last week's defeat by Cliftonville, for the trip to struggling Coleraine.

Portadown may be missing Emmett Friars but Neil McCaffrey returns from suspension for the Showgrounds clash with the Sky Blues, who have Ally Teggart back after illness.

Cliftonville are just four points off the top and they go up against Glenavon at Solitude without the banned Barry Johnston.

Jordan Stewart's return from suspension is a big boost for Glentoran ahead of the meeting with Warrenpoint Town at the Oval.