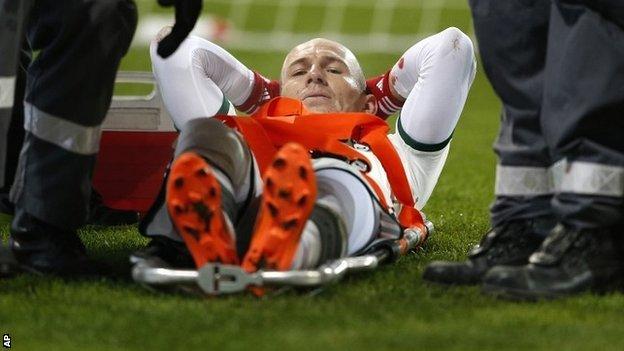 Bayern Munich winger Arjen Robben will miss his side's Champions League clash with Manchester City after being ruled out of action for six weeks.

The Dutch star suffered a knee injury in Bayern's German Cup third round 2-0 win at Augsburg, the club said.

Robben, 29, was stretchered off after colliding with Augsburg goalkeeper Marwin Hitz.

"Robben has a deep cut down to the knee joint," said Bayern team doctor Hans-Wilhelm Muller-Wohlfahrt.

He will also miss Saturday's league trip to Werder Bremen.

"Of course, I am very disappointed," said the former Chelsea and Real Madrid player.

"I was in good form and I was really looking forward to every game with the team."

Champions League holders Bayern host Manchester City in next week's final round of group matches with both sides already into the knockout stages.