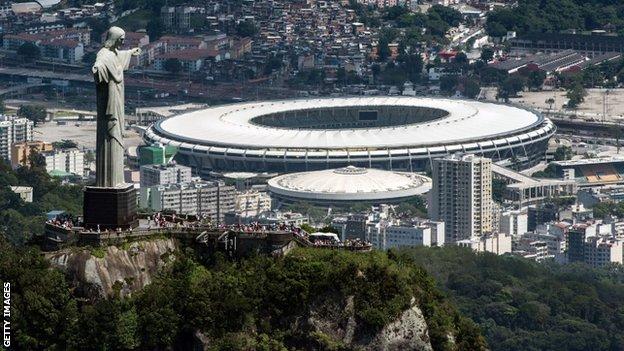 Fifa general secretary Jerome Valcke has appealed to Brazilians to support next summer's World Cup, saying it would be the "wrong time" to protest.

Football's governing body is concerned civil dissent over the cost of the tournament could overshadow the event.

"It is a right to demonstrate," said Valcke. "For them, it's the best time. For me, it's the wrong time."

He also told the BBC that delays in construction had made preparations for the tournament harder than expected.

He said: "[It's] the wrong time [to protest] because it is a time where Brazil should enjoy a unique time, a time they have not enjoyed since 1950.

"A time where they have a national team who won the Confederations Cup - a team that is the potential winner of the World Cup 2014.

"So there should be support from all Brazil for the organisation of the World Cup.

Many of the protesters say the event is a waste of money at a time when there is a squeeze on living costs in Brazil.

Some believe the public investment in the World Cup - almost ÂŁ8bn - should have been spent on schools, hospitals and transport.

"I think the people should be very quiet and pay attention because this is a great moment for the country. It makes good publicity, investment, tourism. I think we have to be careful because it's a big opportunity."

Protests are not Fifa's only concern. There are also serious doubts about the stadiums.

On Tuesday, Fifa confirmed that three of the hosts - Curitiba, Cuiaba and Sao Paulo - would miss their completion deadline of the end of December. There are also serious doubts over a fourth, Manaus.

Brazilian sports minister Aldo Rebelo claimed on Wednesday that all the stadiums would be handed over in January.

But in his interview with the BBC, Valcke seemed to contradict him, saying two of the four may not be finished until March.

"You are expecting that they understand what we need and that they will play the game by saying 'guys we are together' - and that's the disappointment."

Valcke rejected the suggestion that bringing the World Cup to Brazil had been too much of a risk but added that preparations here had been much tougher than the build-up to South Africa four years ago.

"It has been hard, I agree," he said. "In a way, I think that may be because in South Africa you had the feeling from the first minute that South Africa needed to show to the world that they can organise such an event.

"And there was a kind of support and national support and we had not as many problems we face in Brazil."