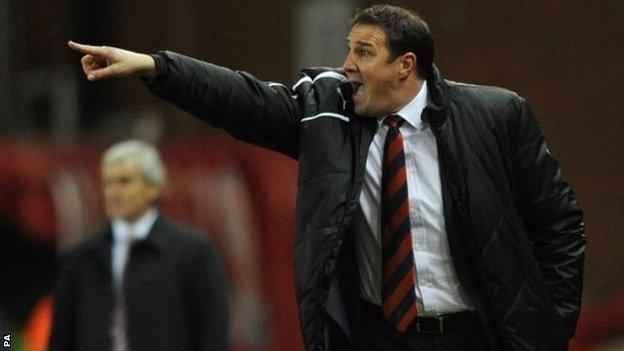 Mackay also believes Cardiff should have been awarded a penalty and praised his side's resilience.

Adam was booked for a first-half foul on Fraizer Campbell and later seemed to push the striker to the floor.

"If you lay hands on somebody and it's not going to be a sending off then it certainly warrants a booking," said Mackay after Wednesday's clash.

"I suppose Charlie Adam was lucky to stay on the pitch then."

The incident happened as Stoke formed a wall shortly before the 60-minute mark.

Peter Crouch also appeared to swing an arm towards Campbell and the two strikers were booked by referee Michael Oliver.

Shortly before that incident Stoke defender Marc Wilson made contact with Campbell in the area and Mackay was adamant the challenge should have resulted in a penalty.

At places like Hull, Fulham, Norwich and Stoke, we have gone to their grounds and been worthy of a point

"They seemed to suggest it was a tangle of legs but I was looking at it and Fraizer actually nicked in and got in front of him and was getting to the ball," said the Cardiff manager.

"At the time I absolutely thought it was a penalty."

Cardiff and Stoke are both four points above the Premier League relegation zone after a match of few chances, although Cardiff's Jordon Mutch saw a good effort saved.

"We have come to another very tough place and been very resilient," said Mackay after the draw.

"We were well worthy of our point. I think we managed to restrict Stoke to one attempt on target.

"We had a couple of attempts and their goalkeeper pulled off a great save late on.

"I am happy with my team and the way they played - they put it to a tough Stoke team.

"We had a couple of chances to win it but probably a draw was a fair result."

Oussama Assaidi, on loan to Stoke from Liverpool, had previously had the best chance of the half while, at the other end, Potters keeper Asmir Begovic saved well from Cardiff's Mutch.

The visitors had a penalty appeal early in the second half when striker Campbell went down but referee Michael Oliver allowed play to continue.

Mackay was delighted his side had picked up their fourth clean sheet in the Premier League and were able to frustrate a Stoke side which were booed off by their own fans at full-time.

"They were a big strong team and we had to make sure we matched that if we were going to play football," added Mackay.

"It was our fourth clean sheet of the season which is something I am delighted with. It is a basis for picking up points in this league.

"At places like Hull, Fulham, Norwich and Stoke, we have gone to their grounds and been worthy of a point.

"We have picked up points at all of those grounds and I am delighted about that.

"I spoke to a couple of Premier League managers before they season and they all impressed upon me how important it is to get any sort of result away from home in this league."