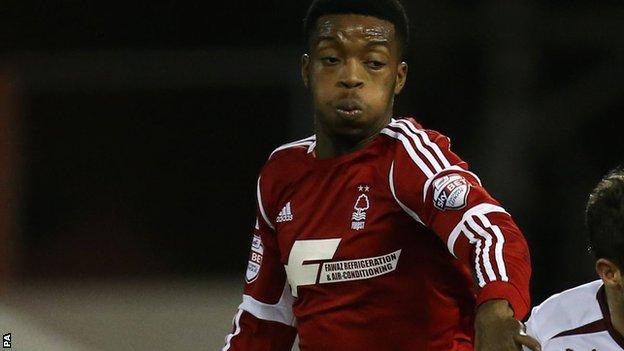 The on-loan Chelsea player, 18, claims he was verbally abused by a section of the home fans during the first half.

But Millwall say a Forest coach told a steward that the player did not wish to make an official complaint.

The Lions added the chances of proving the claim were "significantly reduced" because no complaint was made.

In a statement, Millwall said: "It had been reported by a member of the Forest coaching staff to a Millwall tunnel steward at half-time during the match that the player felt he had been racially abused.

"The Forest coach informed the tunnel steward that the player did not wish to make an official complaint, and in the absence of any corroborative evidence, police were not called and there was nothing reported post-match by the officials, police or Nottingham Forest staff.

"In the light of the player's subsequent decision to raise the issue once more, Millwall Football Club will assist and support any police investigation that may ensue, and if evidence of racism comes to light, do everything possible to ensure the perpetrators are brought to justice and receive due penalty.

"However, we are disappointed that the chances of substantiating the allegations have been significantly reduced due to the fact they were not deemed serious enough for an official complaint, which would have led to immediate police involvement, to be made at the time."

Forest has said in their statement: "Nottingham Forest treat any incident of this nature extremely seriously and will be liaising closely with the relevant authorities in their investigation of this issue.

"At half-time, the on-loan Chelsea midfielder told Forest's deputy manager Ned [David] Kelly that he believed he was subjected to racist chanting from a section of the home support in the first half.

"The 18-year-old, who claims to have been initially subject to verbal abuse from the same section after receiving treatment for an injury in the opening minutes, was upset by the alleged abuse and struggled to keep his concentration during the interval as a result."

The England Under-21 international, who signed a five-year deal with Chelsea in August, joined Forest in September on loan until January.

Since joining the club, he has scored two goals in seven appearances.