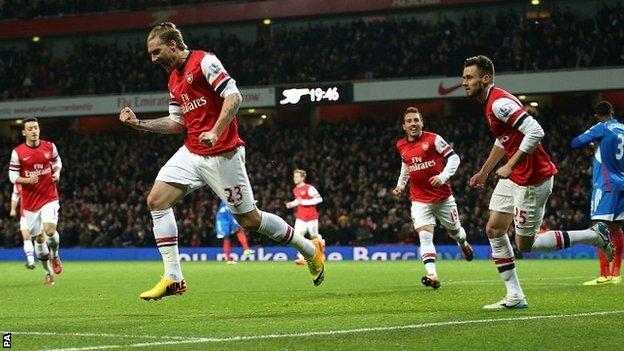 Arsene Wenger said Nicklas Bendtner can contribute to Arsenal's title challenge after the Dane scored his first Gunners league goal in nearly three years to earn a win over Hull.

The 2-0 victory kept Arsenal at the top of the Premier League table, with Wenger making five changes to the side.

Wenger said: "Of course [he can play his part], it depends on his commitment and fitness, he has worked hard.

"When he is physically sharp, he can compete with anybody."

Bendtner back in business

After two seasons on loan at Sunderland and Juventus, 25-year-old Bendtner made his first Premier League start for Arsenal since 5 March, 2011. His last Premier League goal for the Gunners was against Wigan on 29 December, 2010.

But he repaid his manager's faith by heading in after two minutes from Carl Jenkinson's superb cross to tee up a convincing win.

Two minutes into the second half, Mesut Ozil grabbed his fourth goal of the season, following Aaron Ramsey's reverse pass, to secure a sixth win in seven Premier League games.

"[Bendtner] had a good performance, has has the quality, I signed him twice for long contracts because I believe in his quality and when he has that commitment and attitude his quality shows," said Arsenal boss Wenger.

The Frenchman added: "In our job you have to be open-minded and never have definite judgements on people."

Arsenal now have an important run of games before Christmas as they host Everton next Sunday before facing Napoli in the Champions League, third-placed Manchester City away and then second-placed Chelsea at Emirates Stadium.

And Wenger said he was pleased to bring in other players against Hull game and still keep the team's winning form.

He said: "It shows that we have brought the right intensity to the game in our movement and passing and that everybody works together in training and everybody can see that, whatever kind of team we pick.

"We scored some goals that are real quality in our passing and movement and you are pleased when you see that. Overall you could see the movement which was absolutely outstanding but let's keep that attitude, our desire and togetherness for the next game.

"For sure, [we will rotate], but I have a squad that has brought quality and a fantastic spirit in the team so that will help."