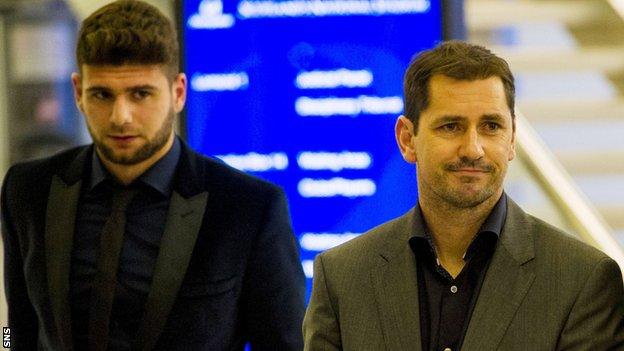 United forward Nadir Ciftci has been banned for two matches for manhandling an assistant referee.

The incident took place during a Scottish League Cup tie in October.

"I think referees or linesmen would appreciate coming out after the game and speaking," McNamara told BBC Radio Scotland's Sportsound programme.

"After that incident [involving Ciftci], I came out and the first thing was the television asking me what happened.

"The referees possibly would feel better if they had done the same to make their job a bit easier.

and made reference to the officials' strike in 2010, which came in response to recent criticisms.

"Following a weekend of action taken by some of our members in 2010, assurances were given by the SFA that it would take very seriously the protection of referees," said the Scottish Senior Football Referees Association.

In response, the SFA said they had not received "any formal correspondence" from the referees' association following the outcome of Ciftci's hearing on Tuesday.

Former Grade One official Stuart Dougal insists referees "just want to go out there and do the game".

"I would like the SFA to allow the referees to venture their opinion a little more than they're probably being allowed to do."

And Dougal does not believe another withdrawal of labour is likely.

"I don't think there's any threat of strike action," he added on Sportsound. "I don't believe there is a growing problem.

"I believe that that reference was made in relation to the fact that we've been here before and it culminated in the strike.