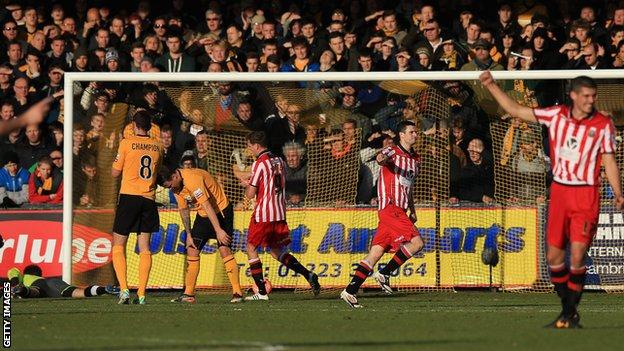 League One side Sheffield United in the FA Cup after overcoming Conference Premier leaders Cambridge in round two.

Jose Baxter's sweetly-hit half-volley put the Blades in front in the early stages at the Abbey Stadium.

But the U's missed a series of chances to equalise, most notably when Adam Cunnington was clean through.

Cambridge's dominance faded and Jamie Murphy scored after the interval to ease any Sheffield United nerves.

The U's noticeably tired in the latter stages but showed enough quality to suggest they can end their nine-year exile from the Football League when they resume their Conference campaign.

Cambridge boss Richard Money, who coached his Blades counterpart Nigel Clough during his playing days at Nottingham Forest and Manchester City, has constructed a side that has set the pace in the Conference Premier.

Clough, on the other hand, adopted a team in October that was struggling in League One and has slowly started to bring solidity to a club that was in the Premier League seven years ago.

Cambridge United academy product Josh Coulson made his 200th appearance for the U's. The 25-year-old defender made his debut for the club six years ago.

The visitors, in need of confidence after one win in their last four games, lacked the conviction needed to build on the lead they took early on when Baxter, who moments earlier saw his header saved, applied a clean connection to Flynn's right-wing cross.

Instead it was the U's, who had won all 11 of their home games this term, who took the initiative. Their patient, attractive play forced saves from goalkeeper George Long through Cunnington, Luke Berry and Harrison Dunk.

Winger Dunk caused Sheffield United all sorts of problems by running at the defence, and he went close again after the break by following up a jinking run into the box with a low shot that Long held.

The Blades rode their luck with four Cambridge penalty appeals for handball waved away, and then punished the home side for failing to capitalise on their dominance by snatching a second.

Murphy, a first-half substitute for the injured Stephen McGinn, evaded a challenge on the edge of the area and eased the ball past the outstretched hand of Chris Maxwell.

There were few scares for Clough's men from that point onwards as the former Derby boss recorded his fourth win since taking charge at Bramall Lane and steered the Blades into the third round.

"I thought we restricted them to very few chances and in the first half we were more than worthy of coming in level.

"We passed it really well and almost broke them down. Half-time gave them a chance to regroup and they sat a lot deeper in the second half.

"The second goal came at a good time for them and in the end it was relatively comfortable for them.

"I've been told at least one of the penalty shouts should have been given. It's unusual you get four or five on the same day and not one is given."

"We had to work hard for it. The first goal was a bit of quality from Jose.

"The most disappointing part of the whole game was the 20 minutes or so after that. We let them back into the game, but apart from that I thought we played well."