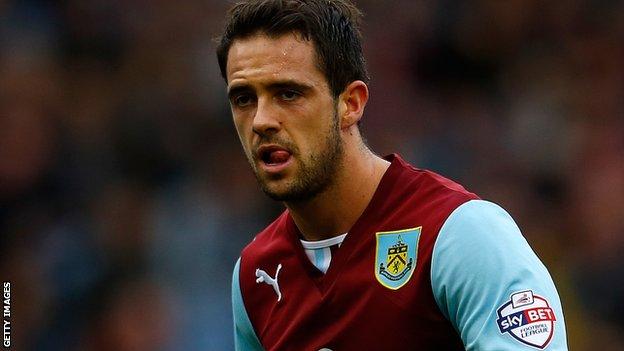 Burnley manager Sean Dyche will look to add a striker to his squad in January.

"We'll be looking again in January because we know what we need and hopefully we can look to reinforce," the Clarets boss confirmed.

Burnley won their 10 of their first 13 Championship games, but have failed to win any of the last five.

And their failure to beat Watford saw them slip out of the automatic promotion places.

"We know what we've got, we know the squad we're working with and we know the challenges of having the numbers we've got," said Dyche.

England Under-21 international Ings, 21, has scored 15 goals this season and his ankle injury will be assessed in the run-up to the visit of managerless Barnsley on Saturday.

Wales forward Vokes, who has 10 goals this term, operated as a lone front man against the Hornets with Keith Treacy, Junior Stanislas and Scott Arfield offering support from midfield.

When asked how he felt his side coped without Ings, Dyche told BBC Radio Lancashire: "Pretty well. We created enough chances. Their keeper [Jonathan Bond] made a fantastic save from Scott, who was playing in a role coming and joining in [with Vokes] and there were other things where we felt we could have scored from."