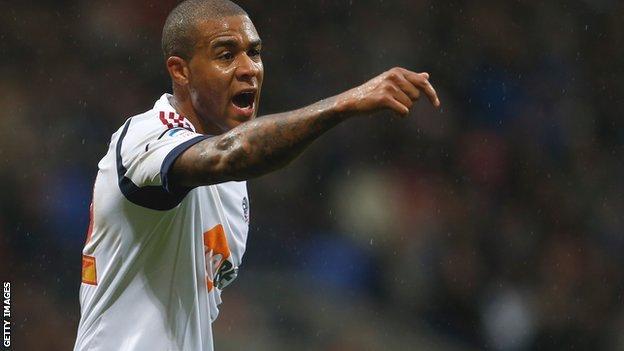 Captain Zat Knight was pleased to return to the Bolton side on Tuesday, despite losing 1-0 to Huddersfield.

Knight, 33, last started in a home defeat by Leeds on 14 September, in which time the side have played 11 games, losing just twice in the league.

"It was good to be out there. Obviously disappointed with the result, but happy to get 90 minutes under my belt," the centre-back told BBC Radio Manchester.

"If I was younger, I would be knocking on the manager's door every day."

Dougie Freedman's side currently lie in 18th position in the division, with just four wins in 18 games this season.

When Knight moved from non-league side Rushall Olympic to Fulham, the Cottagers had no transfer fee to pay. Instead, then chairman Mohamed Al-Fayed sent 30 tracksuits to them as a goodwill gesture.

Knight feels the performances of other defenders in the team means he has had to be content with a place on the bench.

"I am not a selfish player," he continued. "Sometimes you have to hold your hands up. When you get older, you can understand when you see other players doing well.

"I am the club captain so I do give Matt Mills and Tim Ream encouragement after every game, patting them on the back and giving them a hug but hopefully I can get a run in the team."

Meanwhile, midfielder Mark Davies played 65 minutes of a practice match against Rochdale on Wednesday, his first action since at the end of February.

"It's been a long time coming, but it feels great to be back and involved," Davies told the club website. "I've been on the sidelines for near enough a year having done my shoulder prior to getting injured in February, so it's been really frustrating.

"Hopefully soon I'll be back in the thick of it with the boys helping them to pick up results."