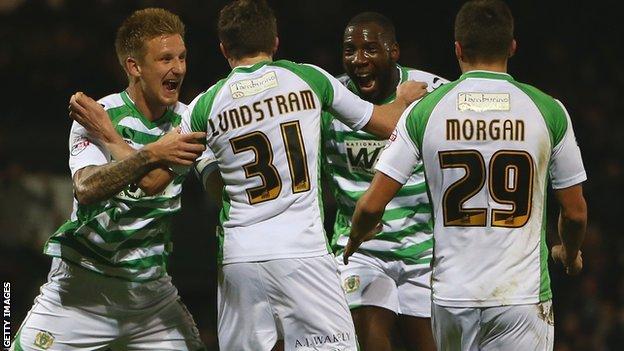 Manager Gary Johnson says his Yeovil players will be boosted by their first back-to-back wins in the Championship.

The Glovers, in their maiden year in the second tier, followed up Saturday's 3-0 win at Watford with a 1-0 victory over Blackpool.

Yeovil remain in the bottom three but are now only two points from safety.

"If it makes the lads feel more confident about being a Championship team then that was a great result.

"The two wins were against no mugs. We went away at Vicarage Road and this was a big win here against a decent Blackpool team."

John Lundstram scored the only goal of the game on Tuesday, as Blackpool finished with eight men on the pitch.

Kirk Broadfoot, Gary MacKenzie and Ricardo Fuller were all shown red cards in the final 10 minutes at Huish Park.

"I warned them it could get niggly, and it did," added Johnson. "We were very clever to not get too involved. They got three sendings off and spoilt their own momentum.

"But even against eight men, we still had to defend. It was a very professional performance."

Yeovil now face Charlton on Saturday, who sit one place above them in 21st and come into the game after consecutive defeats.

"It sets it up lovely but Charlton will be aware of that as well," added Johnson.

"This situation is what we wanted. We've got our sights on Charlton and Millwall and we've brought a few other teams towards us."