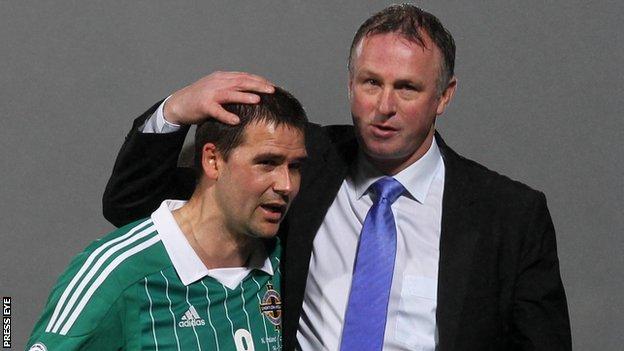 Northern Ireland boss Michael O'Neill has described the retiring David Healy as "an example to all current and future international players".

Healy, without a club since leaving Bury in the summer, announced his retirement on Tuesday.

The 34-year-old is seen as a hero by Northern Ireland fans, having scored a record 36 goals in 95 appearances.

"David Healy has and will always be an iconic player in the eyes of all our supporters," O'Neill said.

"His commitment to playing for Northern Ireland is an example to all current and future international players.

"I know that David will have a lot to offer the game as he embarks on his coaching career.

"David has already performed a scouting role for the senior international team and assisted the Under-17 team as part of his development as a coach.

"I thank David for his contribution to football in Northern Ireland and look forward to working with him in the future."

Healy never featured at a major tournament, despite a stunning return of 13 goals in Euro 2008 qualifying, but leaves the game proud of his achievements.

"It has been an absolute honour and privilege to wear the Northern Ireland shirt, to represent the people of our proud wee country and I hope to continue in whatever way I can, in my new career in coaching, to help Northern Ireland succeed," said Healy.

"Over half my life has been dedicated to the game that I love and although you have to get on by your own efforts and making the best of your own abilities, my career would not have been anything like it has, without the help and support of so many people.

"To the Green and White Army, who have sang my name win or lose, goals or no goals, my heartfelt thanks and respect to you all.

"There have been some pretty tough days in the Green shirt, let's be honest, but when we got it right and when I had the chance to play my part, those are the days that will stay in my memory forever."

The Irish FA will honour Healy with a ceremony at its next competitive match at Windsor Park while there have been calls for a stand at the revamped national stadium to be named after the player.