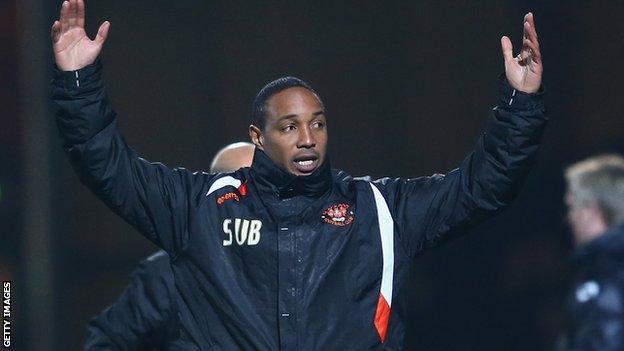 Blackpool manager Paul Ince will discipline the three players who were sent off in their 1-0 defeat at Yeovil.

Kirk Broadfoot, Ricardo Fuller and Gary MacKenzie were all shown the red card inside the final five minutes.

"They've let everyone down," said Ince, who has himself just served a five-match stadium ban. "They've let the fans down and the club down.

"Our main two centre-halves, our stalwarts, are now out for Derby and Ricky [Fuller] did something stupid."

Broadfoot and MacKenzie were both sent off for two bookable offences, either side of Fuller's red for an attempted headbutt on Luke Ayling.

"They are experienced players and they've cost me here and for the next couple of games," added Ince.

"They've got to understand the problems it caused given how well we've done this season and with the games we've got coming up.

"We should know better and they'll be dealt with. I will take further action with them for sure. I think they need to be [dealt with]. I took action against myself when I got banned."

Ince was handed a five-match stadium ban in October, for his conduct towards a match official following his side's 2-1 win at Bournemouth.

He admitted three charges relating to his actions in the tunnel after the game, including that his behaviour constituted violent conduct. He was also fined £4,000.

Speaking to BBC Radio Lancashire, Ince added: "To be fair, Broady [Broadfoot] had to go, that was reckless, and you know you are on a yellow card. The last thing you want is your centre-half sent off. He has just got to stand up. The referee got that one spot on, to be fair.

"With Gary MacKenzie he's gone to ground and it's no more than that. I don't think that was a sending-off.

"Ricky should know better. He puts his head to him. I think the lad [Ayling] went down as if he'd been shot, which is poor. You just want a bit of honesty - he saw a chance to get one of my players sent off and he took it."