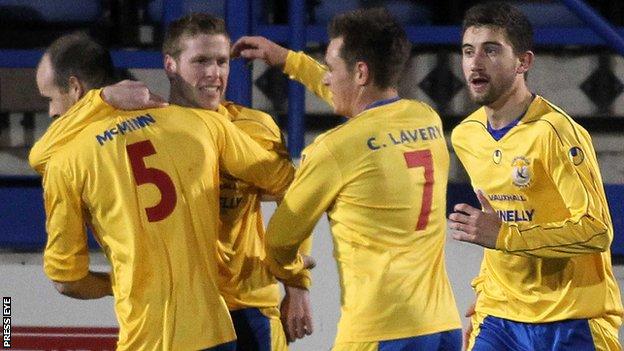 Coleraine manager Oran Kearney has revealed that he has spoken to Dungannon's on-loan striker Darren Boyce about his progress at the Swifts.

Boyce remains on Coleraine's books even though he moved to Dungannon on a one-year loan deal last summer.

"At the minute I haven't decided what will happen in January," said the Coleraine manager.

"I will speak to Darren Murphy (Dungannon manager) closer to the time and take it from there."

Kearney added: "I spoke with Darren last week about how things are going for him.

"His goal-scoring ability has never been in question but I think Darren needed to re-evaluate a few things. I think the move away has helped him do that."

Boyce rejoined Coleraine from Glentoran last season but failed to hold down a first-team place at the Showgrounds.

He has scored 12 goals for the Stangmore Park outfit this season including a hat-trick against Glenavon last Friday.

Coleraine have slipped to 10th in the table after a dismal recent run.

Boyce's goals have helped the seventh-placed Swifts produce a good start to the season, and he was named player of the month for November by the NI Football Writers' Association.