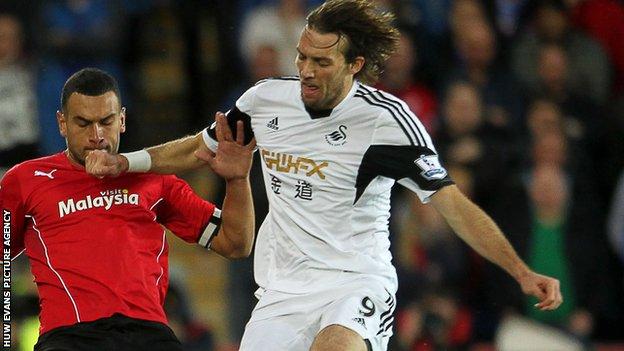 Manager Michael Laudrup says forward Michu is not fit for Wednesday's Premier League clash with Newcastle at the Liberty Stadium.

The Spaniard has not played since he suffered an ankle injury in the 1-0 defeat by Cardiff in the south Wales derby in November.

Goalkeeper Michel Vorm could return from a knee problem to face Alan Pardew's side on Wednesday.

"Michu is better...but it's difficult to predict," said Laudrup.

"Michu has been out for four weeks now...we will see what happens. He is confident that he is towards the end [of the injury].

"He is training inside and we will go out and do something with the physios in the next couple of days and we will see at the end of the week how he is."

Michu was expected to be sidelined for a month but Laudrup claimed there was a chance the Spain international could be back for the Newcastle game.

Vorm missed Sunday's 3-0 defeat at Manchester City with a knee injury and Laudrup will make a late decision on the Netherlands keeper as well as midfielder Leon Britton, who has been troubled by a toe injury.

Swansea will be without a host of injured players for the Premier League clash with Newcastle.

Bony's injury is not as bad as first feared and he will only be out for 10 days despite limping off with a hamstring injury during Swansea's 1-0 defeat to Valencia in the Europa League.

Laudrup had feared Swansea's record signing would be out for "several weeks" but following a scan the Ivory Coast international was diagnosed with a Grade One hamstring strain which has a recovery period of around 10 days.

The Swans will be without defender Rangel for between two and three weeks after the Spaniard suffered a Grade Two calf strain during the same match.

"Bony's injury is less than we first feared," said Laudrup.

"But we will take it step by step and we cannot say exactly when he will be back. Angel is not so bad, but it's at least a couple of weeks."