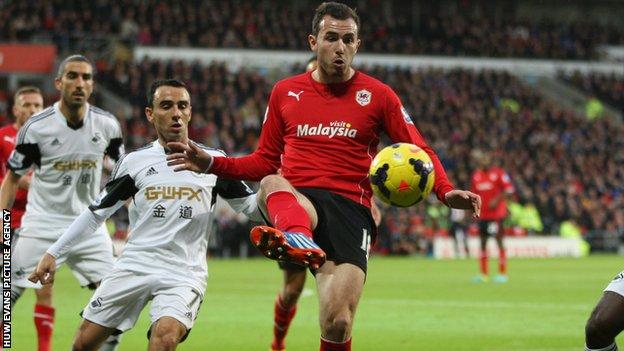 Cardiff City midfielder Jordon Mutch says he is living his dream playing in the Premier League.

The England Under-21 international started the season on the Bluebirds bench, but has played five of City's last six games in the top flight.

Mutch, 22, is expected to start in manager Malky Mackay's first eleven against Stoke City on Wednesday.

"I'm enjoying playing in the Premier League, it's my dream to play in it," said Mutch.

I just love playing football and playing in the Premier League - its broadcast everywhere - and I am just loving it at the moment.

"It's happening at the moment and I am doing everything I can to stay in the team.

"I just love playing football and playing in the Premier League. It's broadcast everywhere and I am just loving it at the moment.

"I'm trying to do things to get better as a player to keep improving to do the business on the pitch.

"I just want to show what I can do...get my head down...and take it by the scruff of the neck."

Mutch, who signed a three-year deal with Cardiff City in June 2012, has impressed with a string of skilful performances, which have seen him score twice against Chelsea and Fulham.

He has added some craft and guile to a Bluebirds side which has earned a reputation for its work ethic in the opening months in the Premier League.

The former Birmingham City player was described by his manager Mackay as a "top young talent" after an impressive display in the 2-1 defeat to Newcastle.

Mutch has set his sights on cementing his place in the Cardiff starting line-up for the rest of the season.

"I want to keep that consistency and keep playing every week," said Mutch. "It's only going to make me better if I keep playing on the pitch."

Cardiff, who have only won one game away from home in the Premier League, travel to face a Stoke side who have not lost their last three games at the Britannia Stadium

Both sides are on 13 points in the Premier League, with the Welsh side currently 17th place in the table, one position below Stoke.

Mutch claims Stoke are a different side usince Mark Hughes succeeded Tony Pulis as manager but believes Cardiff can get a result against the Potters.

"They have a different style of play and try to get it down a bit more and pass it, but they still have that physical side to them because they have a lot of big players," said Mutch.

"They still put it up there and try and get high up the pitch. We will look to combat that.

"We can pick up points against any team on our day."