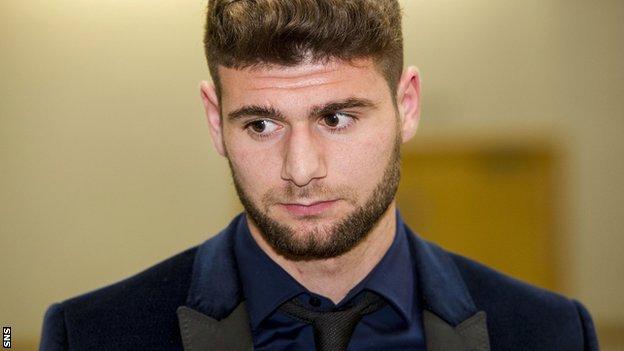 Dundee United's Nadir Ciftci has been given a two-match ban for "excessive misconduct" in the Scottish League Cup defeat by Inverness in October.

The Scottish FA say the breach of disciplinary rule 201 was "proved but in relation to an amended charge".

And this was described as "excessive misconduct at a match by placing an open hand into the lower area of the assistant referee's throat".

One match of the striker's ban is to be served immediately while the second game is "suspended until the end of season 2013-14, to take effect in the event of a breach of disciplinary rule 201 during that period".

The 21-year-old was sent off following a mass brawl during the match at the Caledonian Stadium but following Ciftci's successful claim of wrongful dismissal for violent conduct.

However, he still had to answer the SFA's notice of complaint in relation to his conduct towards Harris and faced a potentially lengthy ban.

Ciftci, who has scored seven goals this season, picked up an injury in but .

The Tangerines' next match is Saturday's Scottish Premiership meeting with Hearts at Tannadice.

And, speaking to Dundee United's website, manager Jackie McNamara said of Ciftci's suspension: "Whilst still disappointed at the outcome we respect the decision and accept that it is now a time to draw a line under this and move on.

"It is more disappointing that the sending off on the night of the game probably cost us our place in the Cup."