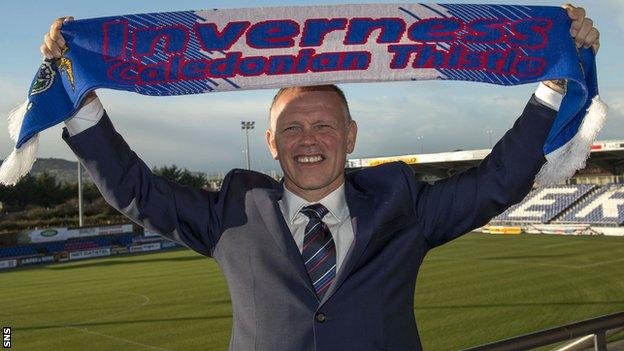 John Hughes has been confirmed as the new manager of Inverness Caledonian Thistle.

The 49-year-old former Hibernian and Falkirk boss replaces Terry Butcher and has signed a two-and-a-half year deal with the Scottish Premiership club.

"It's a massive challenge," said Hughes. "Terry has done a wonderful job, so I'll be taking on the mantle.

He greatly impressed all the directors with his knowledge of the club, his passion and philosophy for the game

"I'm coming to something special and I want to immerse myself in the fabric and history of the club."

The Highlanders sit second in the league and face Hearts in the semi-finals of the Scottish League Cup in February.

"I'm not going to change too much," added Hughes, who and also had a short spell at Livingston last year.

"If I step aside from the football and speak about the people of Inverness, I get the feeling they want a real honest day's shift, they want to roll their sleeves up and are honest people.

"I feel that's the values this football club is built on so that makes it a right good fit for me."

After a playing career that included stints at Berwick Rangers, Swansea City, Falkirk, Celtic, Hibs and Ayr United, Hughes moved into management with Falkirk and led them to the Scottish Premier League in 2005.

After keeping the Bairns in the top flight for four seasons, he moved to Hibs and clinched a Europa League qualifying spot in his first season in charge.

However, a poor start to season 2010-11 led to Hughes leaving Easter Road and he returned to management with Livi in 2012 and then joined Hartlepool towards the end of that year.

Hughes could not prevent relegation to England's League Two and his contract at Victoria Park was terminated in May.

had been in temporary charge of Inverness, who extended their winning run to five matches in all competitions with on Saturday.

Chairman Kenny Cameron said Hughes is in the process of selecting an assistant and "has not ruled out choosing someone already at the club".

Cameron added: "He is an experienced manager which is what we feel is required in the current scenario we have at our club.

"He greatly impressed all the directors with his knowledge of the club, his passion and philosophy for the game.

"We took our time about the appointment as it was important to obtain the right fit for this stage of the club's development.

"John was the person who met our criteria. He has already spoken to the players and made a very positive impact."