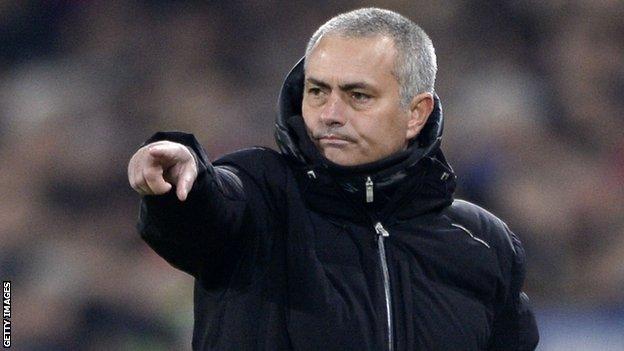 The Blues manager returned to Stamford Bridge in June after winning the Premier League twice in his first spell at the club.

"There is a lot of progress to be made," said the Portuguese, whose side are currently second behind Arsenal.

"There are things in the job that are not easy and one of them is to make the pressure of fighting for the title to be something natural."

"Sunderland's home record is very, very good under Poyet - they have won all three games under him at the Stadium of Light - and they will be confident of continuing that record against Chelsea."

Chelsea last won the Premier League title in 2010 under Carlo Ancelotti and, despite winning the Champions League in 2012 and the Europa League a year later, Mourinho says a different mindset is needed for the top-flight title race.

"We have some players here who have won the title before but they don't win it for quite a long time and when that happens you forget it," he said.

"We have other people that were playing in clubs not used to fighting for titles.

"This culture of being comfortable with the pressure of trying to be top of the league, fighting until the last moment and knowing that every point can make a difference - this is something you need to learn how to live with.

"It is a process. It is not something you do with a click. I want them to feel like I feel. In my career I only finish first or second and if I am not there I am not comfortable."

Mourinho's side visit Sunderland on Wednesday and he added: "By the mental point of view I think it is more difficult [winning the Premier league than Champions League]."

Chelsea are currently four points behind Arsenal and, even though Mourinho says six teams have a chance of claiming the Premier League crown, he believes Tottenham and Manchester United do not have much room for error.

Spurs are 10 points off the top, while United are nine behind the Gunners.

"In this moment, Spurs and United know that if the next step is to reduce from 10 to seven (points behind leaders Arsenal) or from nine to six then it is to go again into the race.

"But I also think that they also know that if the next move is from 10 to 13 points or nine to 12 it becomes hard.

"At the moment, teams like Arsenal are much more comfortable because they can slide one match and nothing happens to them. Some other teams know the next slight can be crucial."

He added: "I keep thinking the same six teams are very equal in their potential.

"The team with more responsibility to win it because the squad is quite unique is Manchester City."