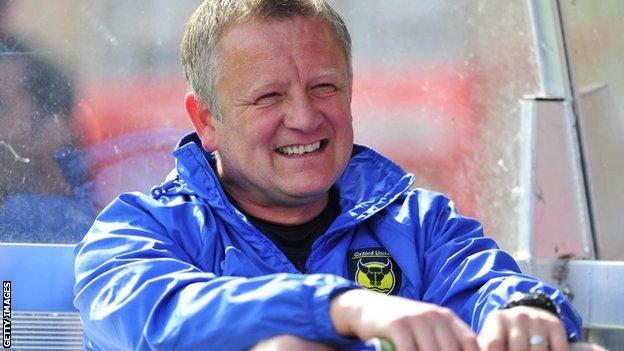 Oxford United have given League Two rivals Portsmouth permission to speak to Chris Wilder about the vacant manager's job at Fratton Park.

Wilder, U's boss since 2008, is in the frame to replace Guy Whittingham, who was sacked by Pompey last Monday.

But Oxford chairman Ian Lenagan is unhappy that news of Portsmouth's interest emerged shortly before his club's match against Fleetwood.

"There are ways of doing these things properly," said Lenagan.

"We feel that the timing of the approach by Portsmouth, and the leaking of that approach on a matchday - whoever was responsible for that - was not doing things properly.

"It is a tribute to Chris Wilder's professionalism that he remained 100% focused on the job at hand, but I will be writing to Portsmouth's board about what happened."

The south-coast club are struggling in 17th place, whereas Oxford are top of League Two and unbeaten in 10 matches.

Wilder, 46, previously managed Alfreton and Halifax and had a spell as assistant boss at Bury before arriving at Oxford, where he succeeded Darren Patterson.

He led the club to promotion back to the Football League in 2010 via the play-offs.

"We have allowed Chris Wilder to speak to Portsmouth, partly out of respect for Chris's long service and partly because we want our manager to be at Oxford United because he has the desire to be here, not because we prevent him speaking to other clubs," said Lenagan.

"Chris and I have been entirely straightforward with each other and from the board's point of view we have made it abundantly clear that we want him to continue doing the good job he has been doing at Oxford United."