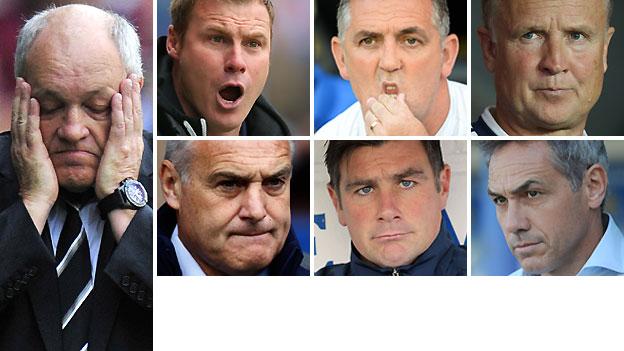 If anyone needed any more proof about the perils of being a manager then it came in the space of eight days across England's top four divisions.

From 25 November to 2 December there were seven managerial casualties but, rather than shock, there seems to be a degree of acceptability to the cull that former England manager Graham Taylor calls "part and parcel" of the game.

According to the League Managers' Association (LMA), of the 19 managers to have left their job so far, 17 were sacked and two resigned. No manager has left to join another club this season.

"There are a lot of new people coming into football and taking clubs over, running them like they would their business," said 69-year-old Taylor, who was also in charge at Lincoln, Watford, Aston Villa and Wolves.

"They are not used to their company not being at the top and when it isn't, they make changes as if they would if their company was struggling."

Neil Warnock has been in charge of 11 clubs in the top four divisions of the English game, and has suffered dismissals at Notts County, Plymouth and QPR.

"You feel desolate when you lose your job," said Warnock. "It's terrible. You've got your own pride and it hurts.

"You get into management knowing you will get the sack - that's why you don't get too carried away when you are winning.

"If you do 15 months as a manager nowadays you have done well. It is a different game now as you don't get the time to build."

The procession of recent exits began with Guy Whittingham being axed by League Two Portsmouth.

The departures of Richie Barker and Sean O'Driscoll from respective League One sides Crawley Town and Bristol City followed, with Championship club Barnsley then dispensing of David Flitcroft.

Owen Coyle's parting of the ways with Wigan, also of the Championship, completed the seven exits in eight days.

Taylor added: "Part of the reason I got out of the profession was because managers at that time were becoming more first-team coaches than managers of a football club.

"I didn't like that and the way the game was changing."

Current England coach Roy Hodgson is president of the LMA and believes the rewards for success are making the job as a manager so precarious.

"As president of the LMA I can't possibly suggest that I'm anything other than disappointed or concerned for all these guys losing their job," he said.

''A major factor is there's so much money and the prizes are so high. If any team falters slightly off the path there is a big temptation for the owner to say another man may alter our path.''

WHAT THE STATS SAY

Guy Whittingham is sacked by Portsmouth. The 49-year-old had been appointed a year ago and left with the club 18th in League Two. Under him, the South Coast club had won five, drawn five and lost six in the league this season.

Pompey chief executive Mark Catlin on the dismissal: "We started off with a mid-table budget and now we have a borderline play-offs budget. Where we are now is not good enough. We're nearer to relegation than we are to the play-offs."

Richie Barker is sacked by Crawley Town. The 38-year-old took over the Broadfield Stadium side in August 2012 and he left after a run of seven League One games without a win, with the side scoring just once in the process. The club were 12th at the time of his dismissal, with 22 points from 18 matches.

Crawley Town chief executive Michael Dunford: "It's never easy. We had to think it was in the best interests of the football club - that is all that matters. We want to take this club forward and the board felt it was appropriate to make a change."

Sean O'Driscoll parts company with Bristol City. Following a run of just two wins in 18 matches, which left them 22nd in League One, the Ashton Gate outfit decide to let the 56-year-old go.

Bristol City vice-chairman Jon Lansdown: "The league table does not lie. We are currently in the relegation zone and have been there for most of the season. This is not acceptable and the board feels that it needs to take action to try and rectify this."

Barnsley sack manager David Flitcroft. The 39-year-old took over at Oakwell in January and saved the Championship club from relegation last season. But the Tykes were bottom with the worst defensive record in the division when he lost his job. Barnsley had won just two of their 17 league games under Flitcroft this season, losing 10 of them.

Barnsley statement: "Barnsley can confirm first-team manager David Flitcroft has been relieved of his position. The club would like to place on record their appreciation and thanks for what David achieved."

Martin Jol is sacked by Fulham. A run of five league defeats, and with Fulham precariously placed in 18th in the top flight, resulted in the exit of 57-year-old Jol, who took over the Craven Cottage club in June 2011.

Fulham chairman Shahid Khan: "Our poor form and results this season are undeniable, and Fulham supporters deserve better. With more than half the season still ahead, an immediate change was necessary."

Sheffield Wednesday sack manager Dave Jones. The Owls took the decision to axe the 56-year-old after just one league win this season from 16 games left them second-from-bottom of the Championship.

Owls chairman Milan Mandaric: "It's a great club and we can't afford to go down so I had no choice but to make the decision I made. Dave is a good man and I enjoyed the relationship we had but I have to do what is best for the club. I hope that the fans support what I have done."

Wigan part company with Owen Coyle. Wigan were hoping to bounce straight back into the Premier League after relegation last term but with their side 14th in the Championship they decided to replace 47-year-old Coyle, who took over in the summer following Roberto Martinez's exit.

Latics statement: "Wigan Athletic have announced that following a meeting with chairman Dave Whelan, Owen Coyle has left his post as club manager by mutual agreement. Both Dave Whelan and Owen Coyle have agreed that this is the right course of action in the best interests of both parties."