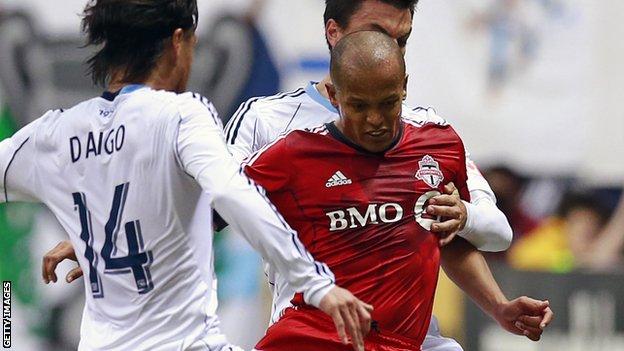 Wales striker Rob Earnshaw is in negotiations with Toronto over a new contract but is also in talks with other clubs.

Earnshaw is out of contract with the Major League Soccer club, which club he joined from Cardiff City in February.

The 32-year-old denied reports he had been released and said he was in talks with Toronto and other clubs.

"I'm still negotiating with Toronto but also speaking to a few other clubs," Earnshaw said.

Earnshaw scored eight goals in 26 games for the Canadian side last season after joining from Cardiff on a free transfer.

The Zambian-born player confirmed negotiations were ongoing with Toronto but he was free to talk to other clubs.

"They [Toronto] have to put in a list of players they haven't agreed a contract with," Earnshaw told BBC Radio Wales Sport.

"I'm actually still negotiating the contract with Toronto because that's how the deals are.

"That's where the situation is with that. I'm pretty free to sign wherever I want.

"I guess we'll just sit down and decide what's the best option."

Earnshaw, who has scored 16 in 58 appearances for Wales, started his career at Cardiff and also played for West Brom, Norwich City, Derby County and Nottingham Forest.