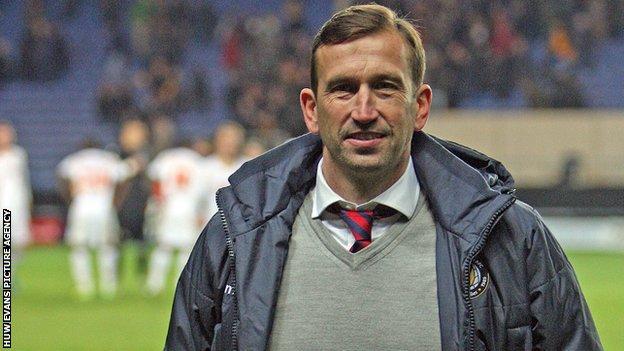 County have turned down an approach from Portsmouth to talk to the former Tottenham Hotspur defender.

Edinburgh, who guided Newport to promotion to League Two last season, is not interested in a move to Fratton Park according to Harris.

"He's very happy at this football club and adored by the fans," he said..

Portsmouth are looking for a new manager after they parted company with Guy Whittingham last week.

Edinburgh, who played 34 league games for Pompey, had been linked with the managerial vacancy at Fratton Park in the wake of Whittingham's departure.

But Edinburgh dismissed the speculation and said he was happy at Rodney Parade.

The 43-year-old succeeded Anthony Hudson as Newport boss in October 2011 and guided the Exiles to a Football League return.

Newport are currently eighth in League Two and Harris acknowledges other clubs will keep a close eye on Edinburgh's progress.

"There's going to come a time when he's going to look at something and say 'that interests me because of the stature'," Harris told BBC Radio Wales Sport.

"The fact that they've fallen from grace and the fact we're in the same league at the moment, I think that he feels he's not finished the job he's started here.

"That's great news for everybody involved with the club.

"I'm just delighted, from a personal point of view, that he wants to continue that and not looking at elsewhere."