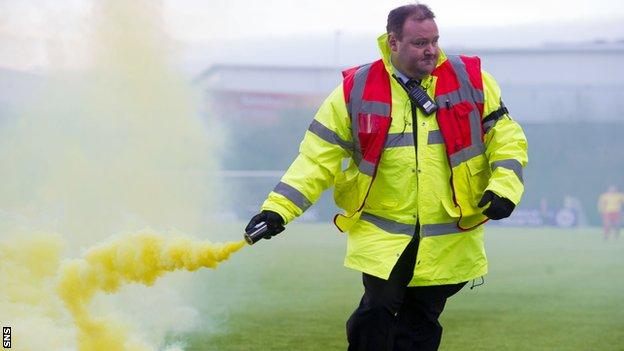 Flares have no place at football stadiums and the Scottish Football Association wants to eradicate their use, says president Campbell Ogilvie.

The SFA has written to all four clubs and is waiting their responses.

"We will work closely with the clubs to try to ensure this is eradicated," said Ogilvie after

"We have got to get to the root of the problem and stop the behaviour in the first place."

Play was briefly held up in the early stages of Rovers' victory over Motherwell at Hamilton's New Douglas Park, where a smoke bomb was thrown on to the pitch from the Scottish Premiership club's support, one of several let off during the game.

Falkirk's artificial pitch was damaged by the flare set off after the final whistle of their defeat by Rangers.

When asked what action could be taken following the weekend incidents at Hamilton and Falkirk, Ogilvie said: "It's up to the compliance officer and judicial panel.

"We have written to all parties involved in the two incidents and we await their replies, but there is no room for that type of behaviour.

"We have got to work together and eradicate this. It's not just about dishing out punishments.

"One of them burnt the pitch. But, more importantly, there could have been a serious injury.

"There is no room for flares at all within football stadia. It's something we have got to work hard at.

"We worked hard at the alcohol side and coin-throwing and eradicated these issues. Flares have crept in from the continental games."

"Our fans have been absolutely fantastic, they have been wonderful in their support and we don't want that to change," he said.

"But needless damage to any surface, particularly a new surface that Falkirk have just brought in, doesn't do the club any good at all.

"We would just ask them to behave. No matter what team you support or whatever game you go to, I don't think it's asking too much to go and watch it in a safe atmosphere.

"That is, without doubt, the most important thing. We have to do everything we can to stop these things happening."