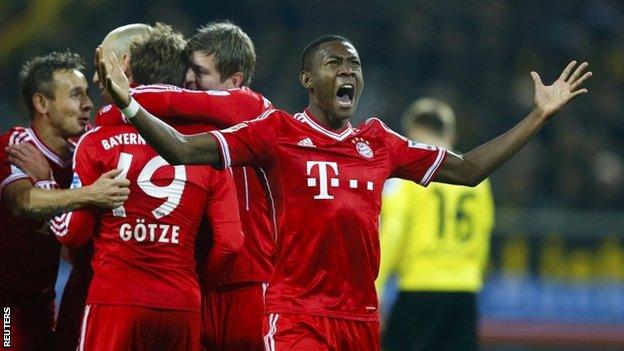 Bayern Munich left-back David Alaba has signed a new contract, keeping him with the European champions until the end of the 2017-18 season.

The 21-year-old joined the German side in 2008 from Austria Vienna before he could make a first-team appearance for his hometown club.

He has played 116 times for Bayern.

At the age of 21, David Alaba has already won the Champions League, two German league titles and two German Cups. He is Austria's current sportsman of the year

"I've been at Bayern since 2008," the Austria international said. "It's long since become my club and I'm happy that everything is now set in stone."

Alaba, who plays further forward for his country, scored six goals in eight games in their unsuccessful World Cup qualifying campaign, including late strikes in each of their games with Republic of Ireland.

His Bayern contract was scheduled to expire in 2015.

"David came to Bayern at 16 and has developed excellently since then," said Bayern chief executive Karl-Heinz Rummenigge. "Today he belongs to the best and most successful full-backs in Europe and we are very pleased to be able to count on his performances in the future."