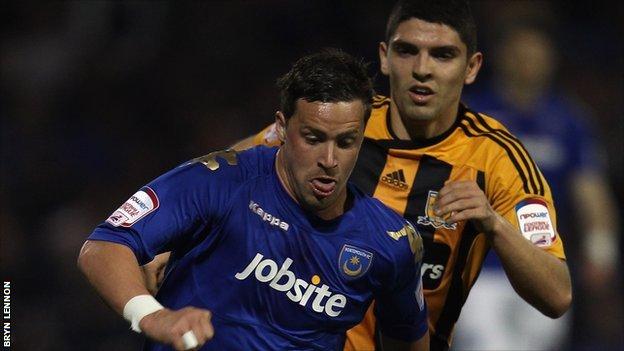 Coventry City's new loan signing Chris Maguire says he hopes he can go from strength to strength after making a spectacular debut for the Sky Blues.

I practise after training and do a bit extra. Hopefully I can go on and get some more."

Maguire, 24, joined the Sky Blues from Sheffield Wednesday last week and scored twice as a substitute in City's 3-1 win at MK Dons on Saturday.

"It's the first time I've got two goals on my debut, so I'm happy," he told BBC Coventry and Warwickshire.

"It's a big club and I'm delighted to come and get some football."

Both of Maguire's strikes were free-kicks and were scored in front of almost 7,000 visiting Sky Blues fans.

"It was great to finally get on the pitch as I've not had that for a while and it was great to cap it off with two goals," he said.

"I couldn't have picked a better end and you saw how much it meant to them.

"The manager just said for me take all set-pieces.

"The first one I took went over the bar and I think some of the lads were fancying it but I was confident I could hit the target," Maguire added.

"I practise after training and do a bit extra but I'm just thankful they went it. Hopefully I can go on and get some more."

Maguire, who started his career with Aberdeen and had spells with Derby and Portsmouth before joining the Owls in June 2012.

He was one of three loan signings made by City boss Steven Pressley before the trip to Stadium MK and will stay with the Sky Blues until 5 January.

However, he may have to miss Coventry's next game as it is not yet clear whether he will be allowed to play in their FA Cup tie at Hartlepool on Saturday with Wednesday yet to decide whether to let Maguire become cup-tied.

"I don't know. It's obviously between the two clubs, it's not my choice," he said.