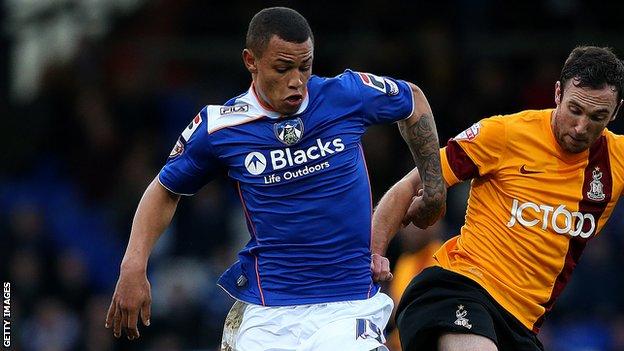 Oldham Athletic manager Lee Johnson believes teenager Jonson Clarke-Harris has all of the attributes to become a top striker for the League One club.

The 19-year-old, a summer signing from Peterborough, scored his third goal for the Latics in at Boundary Park.

"He's got a lot to learn but he's got a fantastic left foot and he's a threat," Johnson told BBC Radio Manchester.

"We work hard with him every day and we are seeing the improvement."

Johnson continued: "His runs, his shoulder position when he's being put over the top and presenting himself in the right to the passer when you're receiving the ball - those are the things that he doesn't do quite right yet.

"However, we can certainly work on that and improve him a lot."

Oldham's run of four consecutive wins in all competitions came to an end against the Bantams, who took a first-half lead through Nahki Wells before Clarke-Harris equalised.

Johnson gave a debut to full-back Ellis Plummer, who on Thursday, and was impressed with the 19-year-old's display in what was his first senior game.

"We know what a good character Ellis is, and as well - he came on and was effective," Johnson said.

"Sometimes it takes these players a couple of weeks to feel comfortable and feel that they're getting on with the lads."