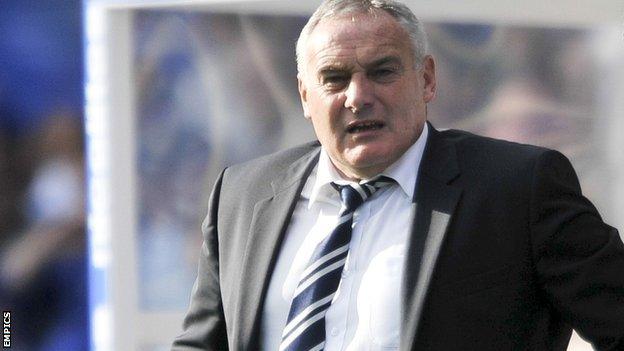 Sheffield Wednesday chairman Milan Mandaric has said he had no option but to sack manager Dave Jones.

The 57-year-old left the club on Sunday after Saturday's 2-0 defeat by Blackpool left them level on points with bottom side Barnsley.

"It's always a hard decision to make and I appreciate the efforts Dave made," he told BBC Radio Sheffield.

"It's a great club and we can't afford to go down so I had no choice but to make the decision I made."

He added: "Dave is a good man and I enjoyed the relationship we had but I have to do what is best for the club.

"I hope that the fans support what I have done."

Jones guided the Owls to promotion from League One in May 2012 after taking over from Gary Megson that March.

Wednesday struggled last season before securing their survival on the final day but they have won just one match so far this campaign.

The Serb claims he does not have a replacement lined up for the former Wolves and Cardiff boss.

"We don't have much time so we will do things as quickly as we can but I don't have one candidate in mind right now," he said.

"We need someone with a winning attitude because we have a lot of quality players and we need a winning culture.

"It's a challenging job because we are six points adrift of safety and I just hope that we can turn things around."

Coach Stuart Gray has been placed in caretaker charge of the side for Tuesday's game against leaders Leicester.