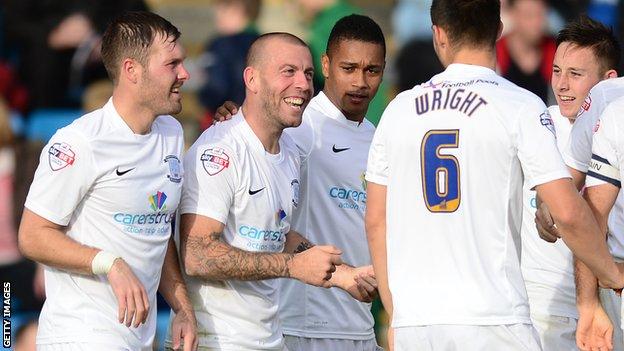 Preston manager Simon Grayson feels his side are capable of promotion this season after claiming a 1-0 win over Bristol City in League One on Saturday.

Jack King scored the winner as North End won at home in the league for the first time since 28 September.

They closed the gap on the top two to six points after Leyton Orient and Wolves both failed to win.

"There is a belief amongst the group that we can be successful this season," Grayson told BBC Radio Lancashire.

League One table in full

"There is certainly a desire to make sure we can do as well as we can."

Preston had lost once and drawn three times at Deepdale since beating Swindon 2-1, but their excellent away form has allowed them to stay in touch with the division's front runners.

Having won while not playing at their best, the former Leeds and Huddersfield boss is happy with the "togetherness and spirit" shown by his players.

"Any win creates a fantastic buzz in the dressing room," added Grayson. "They drag each other along and stick together under pressure, putting their bodies on the line.

"It pleases you as a manager when you can't win games passing it in a slick manner and are able to grind them out.

"Last week [drawing against Colchester] we were devastated. We had played so well and not won the game. I asked the players if we could get seven points this week and they have managed to do that, so it has been a good week."