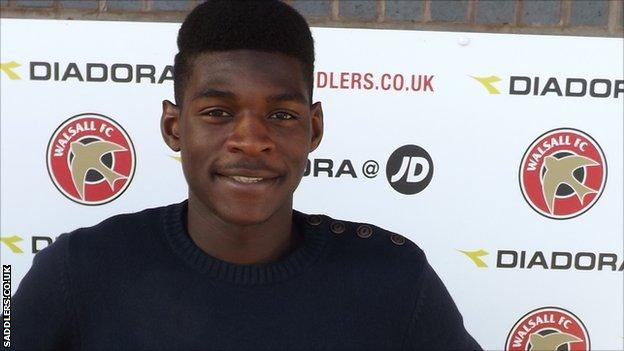 Teenage Walsall academy striker Amadou Bakayoko says he is "extremely proud" to have been given his first professional contract at the club.

Bakayoko, 17, has been in prolific form for the Saddlers' youth team, scoring 10 goals in 12 games, as well as two goals in three reserve-team matches.

The second-year scholar has agreed a one-year deal until the summer of 2015.

"I am extremely proud to sign this and become the first player from my age group to be given a deal," he said.

"I came into the youth team late, but there has been a massive difference in me both as a player and as a person since I have been here.

"I know that the hard work is only just starting. I am looking forward to the challenge and I intend to keep working hard and to make the most of my opportunity.

"The exciting thing about this club is that if you are good enough, your chance will come."

"I am really pleased for him," he said.