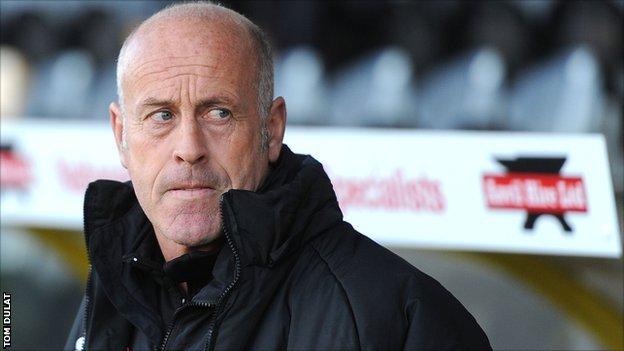 Hereford United manager Martin Foyle says his squad is "below average" and he does not know what sort of performance to expect each week.

The Bulls boss was left angry by the manner of their 3-0 home defeat against Woking in the FA Trophy on Saturday.

"With good players you know what you're going to get. With average players and below, it's fingers crossed," he told BBC Hereford and Worcester.

The quality's getting thinner and thinner as the months go on but that's the position I'm in. I do find it frustrating

Hereford were 3-0 down before half-time against their fellow Conference Premier side and, despite making some changes after the break, Foyle did not see any fightback in front of a crowd of 1,041 - their lowest home gate of the season.

"I don't know whether it's a case of thinking we're better than we are. You keep hearing bits and pieces about the transfer window but it's nowhere near good enough for the next level," he said.

Foyle is trying to keep the cash-strapped club clear of the relegation zone and a run of four games without defeat has seen the Bulls stay six points above the bottom three.

But he says maintaining that distance often feels like an impossible task.

Foyle admitted: "The quality's getting thinner and thinner as the months go on, but that's the position I'm in. I do find it frustrating."

Hereford's exit from the FA Trophy follows their loss to Burton in the FA Cup and leaves them without a potential revenue stream from a cup run.

It has already had financial consequences, with the club announcing a number of further cutbacks at Edgar Street.

Although no redundancies will result, club office hours have been reduced and some hospitality services scaled back in an attempt to reduce costs by further £8000 per month.

They are the latest measures taken following prolonged financial hardship resulting from the club's relegation from the Football League in May 2012.