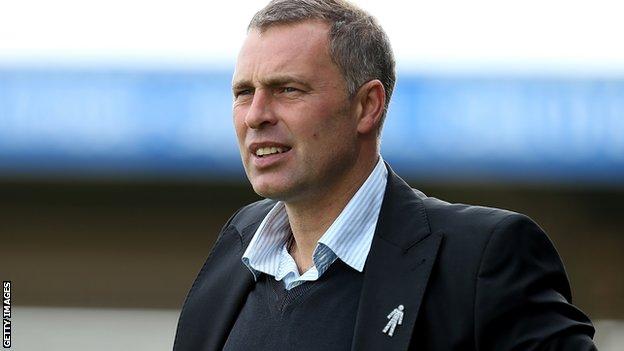 Victory moved the Daggers to within two points of the play-off places.

Burnett told BBC London 94.9: "We have set standards here and they weren't met. They were the better team with 10 men. It was not acceptable.

"I am delighted we have won but it is the worst we have played since I became manager of this club."

Goals from Afolabi Obafemi and a second-half penalty from Rhys Murphy, following Anthony Stewart's sending off, means the Daggers have won six and drawn two of their nine home matches in League Two this season.

However Burnett was unimpressed with how his side dealt with their numerical advantage against the Chairboys on Saturday.

"We should be keeping the ball much better but we kept giving possession away," he said.

"We looked nervous, panicky and like no-one wanted to spend time on the ball. That is so unlike us.

"It was unbelievable and I have never seen it from my team.

"Standards need to be met otherwise we won't do anything this season. If they are not met then we are wasting our time.

"I have told the players exactly how I feel and they are quite clear how I feel."

Burnett saved the Daggers from relegation on the last day of last season and signed a two-year contract in the summer.

The Daggers are currently ninth in the table, but just four points of league leaders Oxford United.

And the 42-year-old says his players must accept criticism if they are to succeed.

"I am their biggest fans, Burnett said.

"I praise them non-stop because they have been absolutely fantastic for me. They are a great group, have a fantastic work ethic and I enjoy working with every single one of those players.

"It wasn't good enough and if any of my players do think it was good enough they need to come and see me and we will have a sit down and a chat.

"If we end up playing like that we won't win very many games this season."