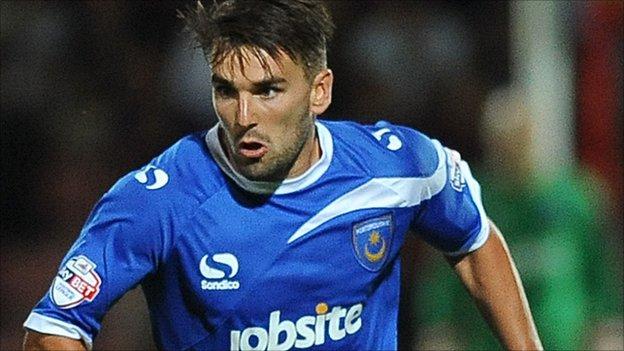 Portsmouth winger Ricky Holmes says the club are in danger of being relegated from the Football League.

Pompey take on Wycombe on Wednesday and are just four points above the League Two relegation places.

And Holmes says they have a fight on their hands to stay in the division with the 2008 FA Cup winners under threat of a third relegation.

"We are not a promotion-chasing team at the minute, we're fighting relegation," Holmes told BBC Radio Solent.

"You always have to look over your shoulder as you will get sucked in.

"In this league, anyone can beat anyone. You think you are four points away from the relegation places and in two weeks you can be one point off. I've been there in the past and we are looking at a relegation fight at the minute."

Managerless Pompey are without a win in six games, having lost five of those matches.

But Holmes says the players are not distracted by not having a manager and admits they owe former boss Guy Whittingham huge gratitude.

"You have to have a professional attitude and get on with your job," he said.

"We are just waiting for a new manager to come in and we'll go from there.

"Guy brought us in and showed faith in us and unfortunately we didn't really do it on the pitch for him.

"Hopefully he can go on and get another job in football if that's what he wants and we wish him all the best. We've got to repay him."

Holmes also says the players owe the fans a big performance having disappointed them in recent weeks.

"We have a home game coming up and we owe them," he added.