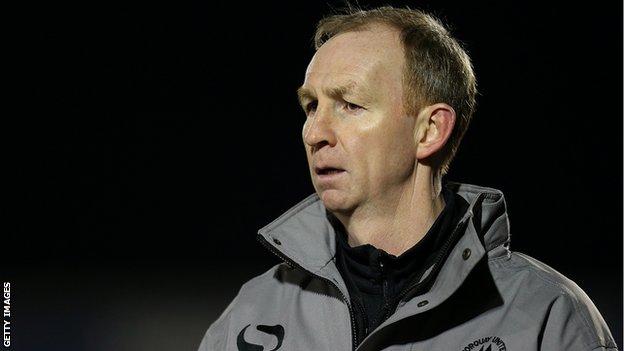 Torquay United boss Alan Knill says he still believes he can turn the club's fortunes around.

The Gulls lost 3-1 at high-flying Scunthorpe on Saturday to leave them bottom of League Two, with just three wins from 19 games.

"I only want the best for Torquay," Knill told BBC Radio Devon.

You put your head down, take the criticism and try to move on as quickly as possible

"We all feel we can turn it around but we have to pick up points. You have to keep working hard and just hope it's going to change."

Torquay have won just one of their last 12 league games, and have gradually slumped down the league table.

"I still think we're going to be OK but at the moment a combination of no luck and poor decision-making cost us and I've been saying the same thing all season really," added Knill.

"Obviously the board feels the pressure so you just get on with it until someone says 'don't'.

"As long as the players are being positive, trying to go forward and taking opportunities, trying to shoot then you think it's going to because there's quality in the team. But the players kept gong which is all you can ask.

"You put your head down, take the criticism and try to move on as quickly as possible."

Meanwhile, Torquay have extended the loan deal with defender Anthony O'Connor by a further month, keeping the young Irishman at Plainmoor until the end of December.