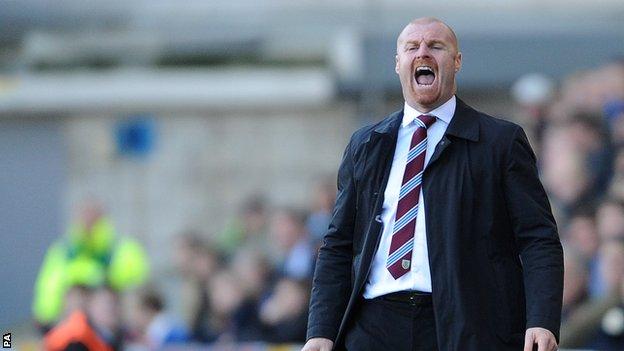 Burnley were already 1-0 behind when Duff was penalised for handball.

"I don't think there's real contact with the hand, but it's outside the box so it's irrelevant anyway," 42-year-old Dyche told BBC Radio Lancashire.

James Vaughan converted the resulting spot-kick as the Clarets suffered their first league defeat since 24 August.

Danny Ings netted a late reply as Burnley, who had Duff sent off late on for a second bookable offence, dropped to second in the Championship, with Leicester assuming top spot.

"I love the fact that our fans back us away from home, and at home as well, and I feel for them," continued Dyche.

"They just want to see two teams go at it and try to win a game. When some of the things go out of your control, it's very difficult for us to take but it's also difficult for the fans to take.

"I always tell the truth about our performances - we were nowhere near our performance level and they obviously raised their game. We delivered a very good second half but we had a lot to do because big decisions went against us."

Burnley have the chance to respond quickly against Watford on Tuesday, the first of two consecutive home games for Dyche's side.

"We are making it a very tough place for teams to come and we've turned over some really good teams," he added. "Of course, we go into it in confident mood."