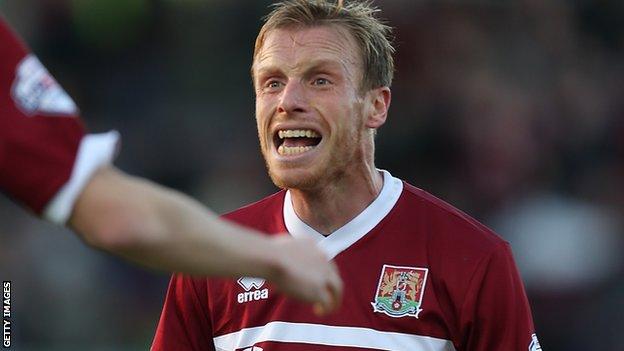 BBC Radio Northampton understands his loan stay at Sixfields, set to end after the game on 7 December, will be extended until January.

Boothroyd said: "We want to keep him and having spoken to him, he wants to stay. We'll see if we can do something with Bradford and make it permanent.

"He's one of those unsung players - the Clive Platt of midfield."

Boothroyd added: "He gets the job done, does the ugly stuff with last-ditch tackles and he organises one or two others.

The pair from Bradford, Matt Duke and Ricky Ravenhill, have been excellent signings this season.

Ravenhill has transformed the Cobblers midfield and it's a testament to him that he's been the toughest-tackling player on the pitch in each of his five appearances and yet he's not been booked.

"He's a winner and he's been absolutely wonderful for us."

The Cobblers have won three matches, drawn at Chesterfield and lost once since Ravenhill joined the League Two strugglers.

They climbed off the bottom of the table with a 1-0 win against Accrington on Saturday.

"The result at Chesterfield was a hard-fought one against a top team," said Boothroyd.

"We've played the in-form team in the division [Accrington] and got a result we deserved.

"The players will get fitter and fitter. The attitude and application is getting better. If we can maintain that then we can haul ourselves out of where we are."