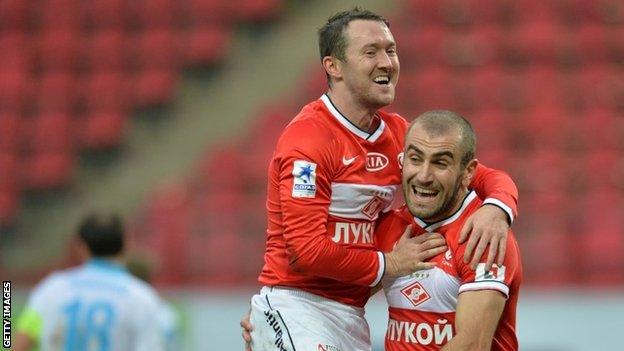 Spartak Moscow boss Valery Karpin says Aiden McGeady can get back into the team despite suspending the Republic of Ireland winger indefinitely from first-team training.

McGeady is training with the reserves for not following Karpin's instructions in training and in matches.

The 27-year-old was left out of Sunday's 6-1 win over Volga Nizhny.

"Everything depends on the player. If he will do all that is required of him, he'll play," Karpin said.

Since Aiden McGeady's move to Spartak Moscow in August 2010, he has been shown more straight red cards than any other player in the Russian Premier League (three).

"If not - it is another conversation. And it's not only him, but also any other [player]."

McGeady, who is out of contract in the summer, could be allowed to join another side when the January transfer window opens.

The wide man, who joined Spartak from Celtic for around £9.5m in August 2010, has previously stated that he plans to leave the Russians at the end of his contract.

However in an interview during the summer, he said: "I am easy. I have enjoyed it and we will see what happens."